At spo-comm quality starts with apprenticeship

Working independently and implementing own projects in the daily routine are a matter of course at spo-comm, even for our trainees during their apprenticeship. This, for instance, shows the final project of one of our trainees Erwin Seliverstov. A single-board computer integrated in a Game Boy housing? That’s not a problem for our future IT systems technician. 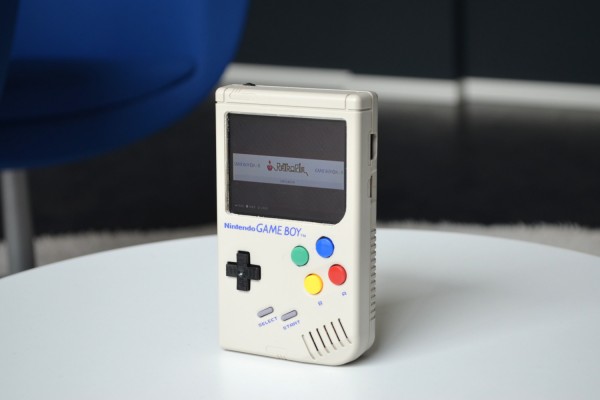 The goal of the final project was to install a single-board computer with a display in a handheld housing of a certain size. In addition, the system should have an easily accessible SD card and a rechargeable battery for mobile use.

Since a classic Game Boy case should be used, the external dimensions of 150 x 90 x 35 mm were fix. This affected the selection of the other components. After a few researches the Raspberry Pi Zero was used as a single-board computer, as it fits perfectly to the requirements – concerning the dimensions as well as the technical data. As a power supply a classical smartphone battery is used. Its voltage is converted from 3.8 to 5 volts using a Li-Ion battery converter, a so-called PowerBoost Charger. As a result, an on/off button and the possibility of charging the battery via micro-USB cable could also be realized.

The main question was: Does all of this really fit into a little Game Boy? The answer is: Yes it does. To store all components, the housing just had to be modified a bit. The display has been extended, the battery shaft removed and additional holes for the control were inserted. The control is, by the way, done via a specially designed control board, a so-called "all-in-one-button PCB" board, which is connected to a classic USB control board. In order to allow an easy change of the SD card, a service flap was installed.

So that’s the point where Erwin had all the important hardware together. But that was not enough: Of course, the software had also to be selected. Our trainee chose an adapted Linux called EmulationStation as operating system. This software allows configuring the different keys with the particular control commands. Now the installation only had to be completed and this very special Mini-PC was finally finished. Using so-called emulators (= programs, that simulate a system to make software compatible), it can now be played with popular retro-games.

There is no question that we want to preserve so much competence and motivation. We are therefore very pleased that Erwin Seliverstov will continue working for us after completing his apprenticeship as an IT systems technician. From August 1, 2017, he will support us with his skills in the areas of service and product management. spo-comm is now certified according to DIN EN ISO 9001:2015. But what does that actually mean?
Read more On the roads of the Nuremberg Web Week #NUEWW

For the fifth time, the Nuremberg Web Week offered digital natives the opportunity to network. The main focuses of the Web Week from the 15th to 22nd of May were events and lectures on digital topics such as online marketing, eCommerce, web development and virtual reality.
Read more It is likely that Intel will introduce a Core i9 processor for the first time, smart cities and smart transportation are the new trend for the internet of things and spo-comm reacts to Intel’s AMT problem. Also new: 4G modules and cables are now in the spo-comm product range, categorized as accessories.
Read more
Stay up-to-date with the spo-comm newsletter.
We use cookies. Some of them are technically necessary (for example for the shopping cart), others help us improve our website and to offer you a better user experience.