We at spo-comm are always interested in further educating our whole team. No matter if it’s by special advanced training or the realization of autonomous projects of an employee. Our IT systems technician Erwin Seliverstov already showed his talent of working on his own projects by installing a single-board computer in a Gameboy housing as his final project in his training. Even now that he’s no longer in his training he still implements such projects and with his newest he made all of his colleagues happy! 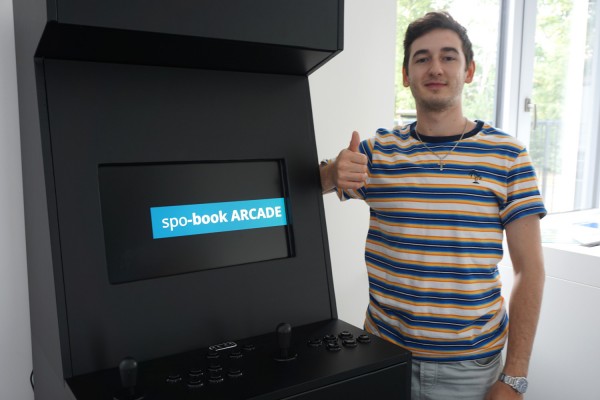 Even after completing his education Erwin constantly takes on new projects. At the beginning of this year he built an arcade gaming machine at home and of course tells his colleagues about it. Our CEO Michael Sporrer also gets a wind of this, too. With great interest he talks to Erwin about how he built the machine and what components he used.

And that’s how the whole new project came to life: Building an arcade gaming machine for the whole spo-comm team’s lunch breaks.

In the first step Erwin did a technical drawing to work out the right measurements. As an inspiration for the form of the machine he researched on the internet. Now it was all about finding the right materials to use as the machine’s housing. Boards were bought, cut to the right sizes, filed and foiled.

On his Gameboy project Erwin made entirely positive experiences with the Raspberry Pi Zero that he used. Also this time he decided to go for it as the underlying single-board computer – more precisely the latest version the Raspberry Pi 3B+. The heart of this computer builds the 64-bit 1,4 Ghz Quad Core CPU that gets supported by an 1GB RAM. It also is equipped with an integrated WiFi, Bluetooth and four USB 2.0 interfaces.

Next to the 19.5” monitor Erwin also installed some speakers. These and the self-built controller board with two joysticks and some buttons, that allow two players to play against each other, really give the machine its retro look. By using the USB hub that sits in the middle of the controller board, different controller such as steering wheels can be plugged in. But also keyboards for an easier usage of the settings can be used.

Now it was all about the software to finish the project. Erwin decided to go for an adapted Linux that is called EmulationStation. This software makes it possible to configure the different keys with the particular control commands. Then the gaming machine was played with many popular retro-games and the project was accomplished!

Controllerboard with joysticks and buttons
Passende Blogartikel
At spo-comm quality starts with apprenticeship
Congratulations on passing the final exams!
spo-comm and MSI IPC: 10 years of cooperation 8 Jun 2017 Array ( [id] => 268 [title] => At spo-comm quality starts with apprenticeship [authorId] => [active] => 1 [shortDescription] => Working independently and implementing own projects in the daily routine are a matter of course at spo-comm, even for our trainees during their apprenticeship. This, for instance, shows the final project of one of our trainees Erwin Seliverstov. A single-board computer integrated in a Gameboy housing? That’s not a problem for our future IT systems technician. [description] =>

The goal of the final project was to install a single-board computer with a display in a handheld housing of a certain size. In addition, the system should have an easily accessible SD card and a rechargeable battery for mobile use.

Since a classic Gameboy case should be used, the external dimensions of 150 x 90 x 35 mm were fix. This affected the selection of the other components. After a few researches the Raspberry Pi Zero was used as a single-board computer, as it fits perfectly to the requirements – concerning the dimensions as well as the technical data. As a power supply a classical smartphone battery is used. Its voltage is converted from 3.8 to 5 volts using a Li-Ion battery converter, a so-called PowerBoost Charger. As a result, an on/off button and the possibility of charging the battery via micro-USB cable could also be realized.

The main question was: Does all of this really fit into a little Gameboy? The answer is: Yes it does. To store all components, the housing just had to be modified a bit. The display has been extended, the battery shaft removed and additional holes for the control were inserted. The control is, by the way, done via a specially designed control board, a so-called "all-in-one-button PCB" board, which is connected to a classic USB control board. In order to allow an easy change of the SD card, a service flap was installed.

So that’s the point where Erwin had all the important hardware together. But that was not enough: Of course, the software had also to be selected. Our trainee chose an adapted Linux called EmulationStation as operating system. This software allows configuring the different keys with the particular control commands. Now the installation only had to be completed and this very special Mini-PC was finally finished. Using so-called emulators (= programs, that simulate a system to make software compatible), it can now be played with popular retro-games.

There is no question that we want to preserve so much competence and motivation. We are therefore very pleased that Erwin Seliverstov will continue working for us after completing his apprenticeship as an IT systems technician. From August 1, 2017, he will support us with his skills in the areas of service and product management.

At spo-comm quality starts with apprenticeship

Working independently and implementing own projects in the daily routine are a matter of course at spo-comm, even for our trainees during their apprenticeship. This, for instance, shows the final project of one of our trainees Erwin Seliverstov. A single-board computer integrated in a Gameboy housing? That’s not a problem for our future IT systems technician.
Read more 25 Apr 2018 Array ( [id] => 324 [title] => Congratulations on passing the final exams! [authorId] => [active] => 1 [shortDescription] => After two and a half years our trainees Alex Gill and Anna Greul finally made it! They’ve successfully passed their written and oral examinations one month ago. [description] =>

Office management at the spo-comm GmbH

Our co-worker Anna started her apprenticeship in office management in September 2015. During this time she visited the vocational school 9 in Nuremberg once a week. Due to her good academic performance she was able to complete the training six months earlier.

The main focus in Annas training was on one hand the office management – such as corresponding and telephoning with our customers, but also planning company events. On the other hand she was busy with everything that has to do with EDV – Word and Excel for example.

“When I started my apprenticeship two and a half years ago my colleagues welcomed me sincerely, so that I felt a sense of well-being right away. Because team spirit and an open communication have great emphasis in our company I soon got the chance to work on my own projects. Everything new that I have learnt in that time helps me to carry out challenging projects all by myself. In May 2018 I have the opportunity to qualify as a training supervisor with the IHK alongside my job. I am very happy to be and stay a member of the spo-comm team and I’m looking forward to all the exciting challenges that will come in the future!”

IT systems electronics engineer at the spo-comm GmbH

In contrast to Anna our colleague Alex works in a completely different department in our company. His training as an IT systems electronics engineer also began in September 2015. Luckily also Alex was able to complete the training half a year earlier due to his good grades.

Always in touch with our customers and suppliers Alex takes care of the configuration of the customers Mini-PCs. And even for the repair of the systems Alex is responsible – he looks for the problem and after finding it the hardware or software can be repaired.

“I’m very happy to be here and also that I did my training at the spo-comm. As I dealt with computers even before I started my training it was the perfect way to combine hobby and my job. I work independently on my own projects and I am very excited for new interesting tasks here at spo-comm.”

We at spo-comm are very happy to have Alex and Anna as members in our team. We’re looking forward to a great time and even greater projects together with these two.

Congratulations on passing the final exams!

After two and a half years our trainees Alex Gill and Anna Greul finally made it! They’ve successfully passed their written and oral examinations one month ago.
Read more

11 Oct 2017 Array ( [id] => 288 [title] => spo-comm and MSI IPC: 10 years of cooperation [authorId] => [active] => 1 [shortDescription] => Since almost 10 years spo-comm and MSI IPC have been working together. At the very beginning of this cooperation a new Mini-PC was launched – the WINDBOX. This series is celebrating its 10 year anniversary soon and we would like to share the WINDBOX’s story at spo-comm with you. [description] =>

In 2010 the first Mini-PC of the series III – t – was released. Using a Dual Core CPU and the first Intel HD graphics, it was now possible to complete even more demanding operations.

Since almost 10 years spo-comm and MSI IPC have been working together. At the very beginning of this cooperation a new Mini-PC was launched – the WINDBOX. This series is celebrating its 10 year anniversary soon and we would like to share the WINDBOX’s story at spo-comm with you.
Read more
Stay up-to-date with the spo-comm newsletter.
We use cookies. Some of them are technically necessary (for example for the shopping cart), others help us improve our website and to offer you a better user experience.