We now know, thanks to part 1 and part 2, why metal housings and energy efficiency are so important for industrial PCs. The third part of our series is about the use of Mini-PCs in the so-called extended temperature range. Get your winter jackets and sunscreen ready, it is going to be freezingly hot! 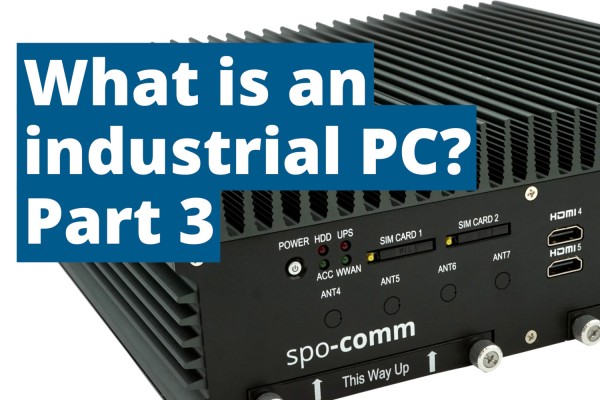 If the hardware of an industrial computer is designed for an ambient temperature of 0° to +50° Celsius, then we speak of the so called standard temperature range. Any computer that wants to be called an industrial PC must at least be up to this requirement.

By the way, did you know? We from spo-comm sometimes call our IPCs, due to their space-saving sizes, "Mini-PCs". However, all our systems in our product range meet the requirements of an industrial PC.

With regard to lower temperatures, the Alps could be mentioned as a possible place of deployment. Such as the scientists of the research team of PMOD/WRC, who specialize in climate modeling and use our RUGGED HM87 for cloud research. In the Alps minus degrees are reached quickly and snow should not be a rarity (as we heard). Nonetheless, the RUGGED HM87 has been reliably performing its work for several years, thanks to its outdoor suitability.

And what about high plus degrees of up to +70° Celsius? Here, as well, we have an exemplary use case from the RUGGED family. Our RUGGED HM87 took off into the desert a few years ago, according to the gusto of Indiana Jones. There he is lending ATMs his power. Who thinks that finest sand dust could cost the RUGGED his life, is wrong. Thanks to the passive cooling system of the RUGGED family, the enclosures of the systems are completely closed and therefore resistant against dust and sand.

Any questions? Or are you looking for a suitable industrial PC? Our consultants will gladly assist you in the selection! In our small but fine series about the stars in our product catalog, it's all about what makes industrial PCs to what they are. Because industrial PCs (also called "IPCs") must fulfill special requirements in order to be considered as such. In the first part of our 5 part blog series, we will focus on the cases. Here we go!
Read more Did part 1 of our current knowledge series about the industrial PC convince you? Then let's move on to the next article! The second part of our blog series about the robust computing systems is about the energy-efficient design of the systems. Why that is so important you ask? We clarify.
Read more Ever wondered what would happen if a large project can not be supplied with the required PC systems, already after a short time? Exactly: it would not be that great. In the last part of our blog series about industrial PCs we reveal, why long-term availability is the icing on the cake.
Read more
Stay up-to-date with the spo-comm newsletter.
We use cookies. Some of them are technically necessary (for example for the shopping cart), others help us improve our website and to offer you a better user experience.