For the last part of our multi-monitor series we want to take a closer look on the settings for the multi-monitoring with AMD and what special features these graphic chips have. 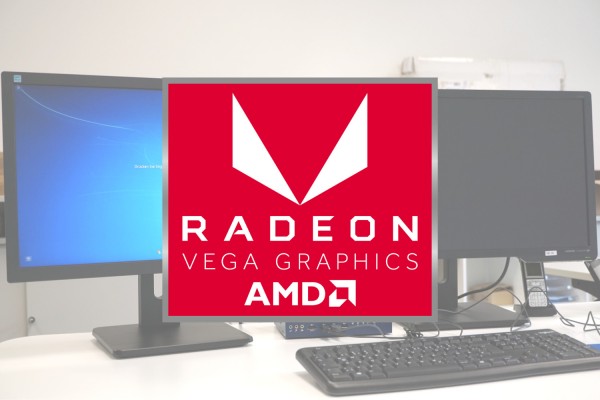 At the beginning of 2018 the first AMD Ryzen™ desktop processors with integrated Radeon™ Vega graphics card were released. Due to this all-in-one solution customers no longer need separate processors and graphics cards – perfect for everyone, who uses desktop devices and appreciates high performance. According to AMD, the Ryzen™ processors with Radeon™ Vega graphics card “deliver powerful multiprocessing out-of-the-box” due to the 4 cores and up to 8 processing threads. In addition to this, they also provide a high level of responsiveness in applications that use the GPU acceleration. (Source: amd.com)

The easiest way to duplicate or extend the screen when using an AMD graphics card is – as well as for Intel and Nvidia – via the Windows settings. These can be called up with a right click on the desktop either under the name “resolution” (Windows 7) or “display settings” (Windows 10). Those of you who want it even faster can use the short cut Windows and P.

For the multi-monitoring AMD provides a special feature, too. It is called Eyefinity and stands for a technology with which the screen can be multiplied. This technology is made for gamers and professional users and developers. Using the Radeon™ graphics cards, up to six displays can be connected.

The settings for Eyefinity cannot be found in the standard Windows settings, but in AMD’s own graphics card driver tool. Once this had the name Crimson and is nowadays called Catalyst Control Center – or short CCC. This tool can also be called up with a right click on the desktop. How an Eyefinity display group can be set up is shown in this video.

Next to the Embedded-GPUs AMD also provides separate graphic processors. You can find a summary of the desktop and mobile processors here. By using a native AGP interface, the GPUs can be inserted into PCI graphics cards. Also, the settings for the multi monitoring with non-embedded GPUs is identical with the ones that are mentioned above.

The product portfolio of spo-comm provides two AMD based Mini-PCs. On one hand we have our passively cooled RUGGED Ryzen that can play content in a resolution of 4K@60Hz on up to four displays at the same time. This is ensured by its Ryzen V1807B CPU with integrated Vega 11 GPU. On the other hand there is our KUMO Ryzen, which is the AMD counterpart to our best seller in the digital signage field KUMO V. This Mini-PC is also equipped with a performant Ryzen V1807B processor and the Vega 11 GPU. Using its four DisplayPorts the system is perfectly made for the use in digital signage applications in the high end field. With the KUMO Ryzen the spo-comm presents another AMD based Mini-PC. The AMD® Ryzen V1807 CPU and the integrated AMD® VEGA 11 GPU provide a graphics power that enables digital signage applications in the high end field.
Read more An AMD Ryzen V1000 processor for outdoor DS applications – sounds good? spo-comm makes this possible. With the fanless cooled spo-book RUGGED Ryzen, the hardware manufacturer from Nuremberg is launching a Mini-PC that not only has an extremely high graphics performance – 4x 4K@60Hz is no problem – but is also suitable for outdoor and vehicle computing.
Read more A few weeks ago we already looked at how integrated graphics cards deal with Multi-Monitoring. Today it is all about the dedicated graphics cards GeForce and Quadro by Nvidia and what features they have.
Read more
Stay up-to-date with the spo-comm newsletter.
We use cookies. Some of them are technically necessary (for example for the shopping cart), others help us improve our website and to offer you a better user experience.