Security: Mini-PC with battery as UPS

Another alternative to the uninterruptible power supply (UPS) is presented in the third part of our blog series about security: the Mini-PC with built-in battery. 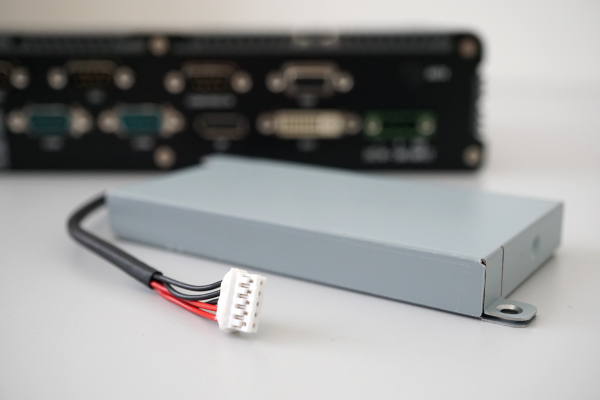 A blackout is always bad for PCs and server systems. Short failures in the millisecond range are already sufficient to turn off electronic devices. As a result, ongoing operations are aborted and unsaved data are lost. In order to protect oneself against this, a so-called UPS (abbreviation for uninterruptible power supply) is often used. In case of a blackout, these emergency power units can supply devices with battery power. Unfortunately they are often quite expensive, large and unwieldy.

Built-in battery instead of UPS

An alternative to an UPS are PCs with built-in battery pack, such as the spo-comm series MOVE and RUGGED. With this optional supplement, the power supply is sufficient to bridge a short failure of up to 10 minutes. Enough time to save operations, shutting down programs and turning off the Mini-PC. Also you have the possibility to configure the BIOS in order to complete all memory operations automatically and to shut down the PC properly.

This is also interesting for use in vehicles for which the MOVE series was originally designed. If the vehicle-PC is equipped with a battery, a sudden shutdown or stalling of the engine does not have any negative consequences for the ongoing operations.

##Discover the MOVE series of spo-comm

##Discover the RUGGED series of spo-comm 27 Jul 2017 know-how
Security: Powerguard SSD
In an industrial environment data loss is often a critical point. If you can’t rely on a uninterruptible power supply (UPS) for reasons of cost or space, there’s a new possibility to provide more security: with so-called Powerguard SSDs.
Read more 22 Jun 2017 know-how
Security: What is TPM?
Whoever works with sensitive data every day, tries to secure them as good as possible. One way to encrypt data is the Trusted Platform Module (TPM). In the first article of our new series about security, we will explain what this is all about.
Read more