There are so many options on how to play various content from a mini-pc on a display. Graphic cards provide a numerous amount of connection possibilities (outputs), which in turn face other inputs on the displays. Often that’s the reason for the cable chaos behind the monitors. In this article we will discuss which interfaces for transferring graphic contents are available, what the difference between them is, and which standards they meet. 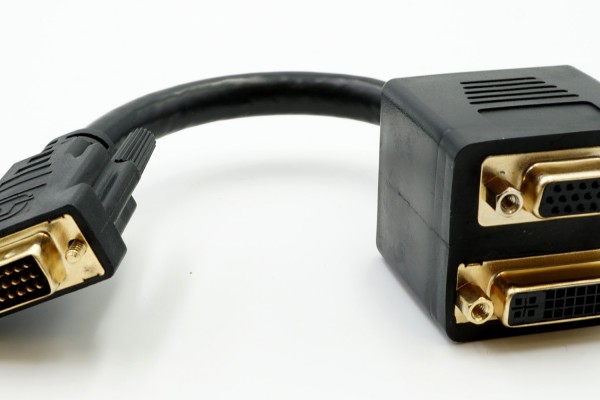 The old hand: The analog VGA-interface

If we talked about an Indian tribe today the VGA interface would be our tribal leader. This interface is available on the market already since 1987 and although it’s slowly declining it’s still quite widespread.
VGA stands for Video Graphics Array and is a purely analog interface which changes analog signals into digital. Although this interface has been the standard for about 20 years it has many disadvantages. Originally the connector was designed for a maximum resolution of 640x480 px but nowadays even Full HD pictures can be played through modern calculation methods. Strong disturbance sources such as too long cables have strong negative effects on the picture quality, this is why the VGA interface was replaced by technically more complex interfaces over the years.

The successor of the VGA connector is the “Digital Video Interface”, shortly DVI. Using the DVI interface makes it possible for the first time to digitally exchange higher resolutions. This is possible thanks to the TMDS (”Transition-Minimized Differential Signaling”) standard, which eliminates electromagnetic interference that was usual for analog signals. Although the name of the connector doesn’t suggest it: with help of a DVI-A plug pure analog signals can be transmitted. If the standard DVI-D plug is applied, the signal is digital and the content can be displayed with a resolution up to 2560x1600 px and a frame rate of 100 Hz. Also the combination of analog and digital signals is possible with this interface: one needs a DVI-I plug for it. The amount of pins needed is higher, however the resolution remains congruent with the resolution of the DVI-D plug.

HDMI – Digital audio and image files up to 4K and 3D

The HDMI interface is the further development of the DVI connector and is surely the most well-known interface among the mentioned ones. HDMI, which stands for “High Definition Multimedia Interface” prevails especially in the home cinema and console field.
With help of just one HDMI cable digital image and audio files can be exchanged parallel between two devices. The HDMI 2.0 standard transfers up to 2160 signals at 60Hz for 4K-UHD materials and also supports a 1080 px resolutions with 48Hz for 3D materials (see also "What is the difference between Full HD, UHD and 4K?"). In its latest version the HDMI interface has three different plugs; the standard one is the HDMI type A. For applications with little space the type C or Mini-HDMI is suitable. For ultra-mobile applications with smallest space available the type D or micro-HDMI is perfect.

The better HDMI? The DisplayPort

The DisplayPort interface is a license-free connector standard that’s able to transmit audio and image signals symmetrically just like the HDMI. The DisplayPort was standardized by the VESA (Video Electronics Standards Association) and was created to replace the VGA and DVI.  Just like DVI and HDMI the DisplayPort is also a digital interface, which is mostly used in the field of modern PC monitors and graphic cards. The data transmission process of the DisplayPort is better protected from the interface radiation, which makes a resolution up to 5K possible, which is 5120x2880 px at an image rate of 60 pps.

Feel free to contact us, we will be happy to provide you with more detailed information!

Probably the most famous interface in our series about multimedia interfaces answers to the name of HDMI. Its cables connect almost everything in the domestic entertainment system. In this article, we want to explain, what hides behind the interface and its fitting cables.
Read more