DirectX is probably common among many gamers, but it is also a topic when talking about Mini-PCs, especially when it comes to programming multimedia content. But what is DirectX actually? 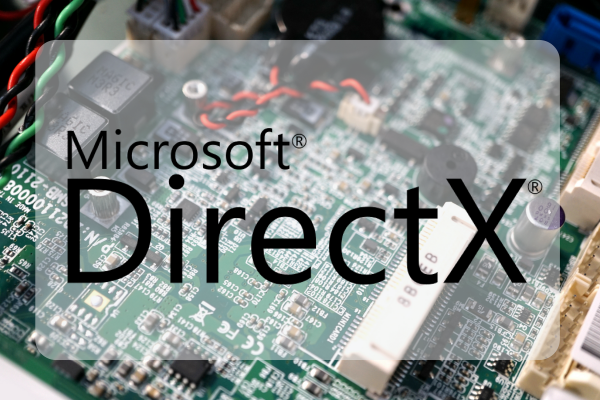 DirectX is an API (short for „Application Programming Interface“) for multimedia applications and games on Windows as well as on the games console Xbox. It acts as a link between the hardware, the Windows operating system and the particular program you use, usually games. Since the hardware (e.g. graphics card, sound card, mouse) and the computer games come from many different manufacturers, this uniform interface guarantees a smooth process and simplifies the development of new products. Thanks to DirectX game developers must only pay attention to the specifications of this API instead of adapting their game to a number of graphics cards.

How was DirectX developed?

DirectX was originally developed for PC games. As Microsoft Windows spread in the 1990s, there was a so-called WinAPI for applications, but still no API for fast graphics and audio playback, as it was needed for games. These were therefore often developed only for MS-DOS. After the success of the game “Doom” Microsoft also recognized the potential of PC games and began to develop programming interfaces for Windows 95. As a result, version 1.0 of DirectX was released, but it took until version 3.0 until that DirectX was taken seriously by game developers. Over the years, DirectX was further developed. The current version DirectX12 was introduced in 2014.

How it DirectX structured?

DirectX is used in the entire multimedia area: in the presentation of graphics, playback of audio but also for input devices such as mouse and joystick. It consists of the following parts: DirectX Graphics provides access to the graphics card; DirectSound is responsible for playing and recording sound and has meanwhile been replaced by XAudio 2; DirectMusic allows playback of music; DirectInput is the standard for input devices such as a keyboard, mouse or a joystick, since Windows XP it has been replaced by XInput; DirectPlay is used to communicated within multiplayer games and DirectShow is for processing video and audio files.

Passende Blogartikel
What is OpenGL?
What is CUDA?
What is Vulkan? 4 Mar 2019 know-how
What is CUDA?
While launching our new Mini-PCs QUADRO P1000 and TEGRA 2 we already talked a lot about NVIDIA CUDA and the so-called CUDA cores. But what is CUDA actually?
Read more