PCs with several hard disks always have the possibility of a RAID level. In this article we will clarify, what it’s all about with RAID 0 and 1 and which advantages and disadvantages the different levels implicate. 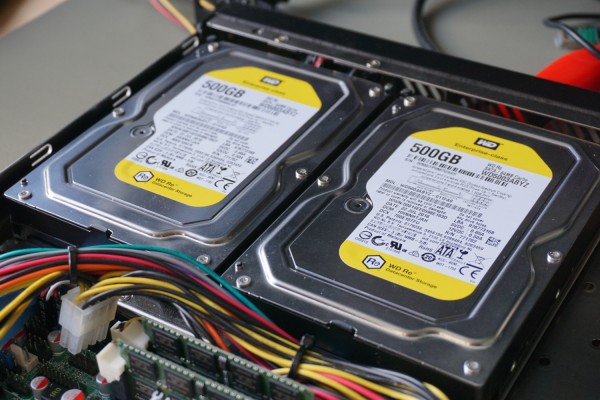 The abbreviation RAID stands for “Redundant Array of Independent Disks”. In a technical context, redundancy means, that there are additional parts of a system, which are functionally identical or comparable and which are not required for a normal operation. If a failure occurs, they can jump in or, if they are already running parallel, they can henceforth operate alone.

A RAID is a combination of at least two mass storage devices (hard disks or SSDs) that work together. Size and type of the storage medium should be the same. The various RAID levels (e.g., RAID 0 or RAID 1) provide different amounts of storage and security.

The RAID can be created in different ways. The hardware RAID requires an extra microprocessor, a so-called RAID controller. The chip is often located near the memory and organizes the data distribution. The main processor is not stressed. Larger network environments, such as data centers, often use external RAID systems.

The software RAID is organized completely on the software side. The RAID can be implemented directly in the BIOS, to install the operating system on it. Like this, the OS can be saved. Alternatively, the RAID network can be established in the operating system. Then it does not benefit from the RAID. Since no special RAID controller is available, all calculations are carried out by the main processor. Thus, depending on the application, it is more highly loaded.

A RAID 0 combines two or more storage devices into one logical drive. These can operate at an increased speed. For this purpose, the disks are divided into blocks of equal size. These blocks are then arranged alternately in zipper style. This technique, where all disks can be accessed parallel, is referred to as “striping”. The advantage of RAID 0 is the accelerated data transfer. One disadvantage is the lack of security: if one hard disk fails, the data can not be fully restored. Therefore it is only recommended, if reliability is not important. Since there is no redundancy in RAID 0, it is actually not a RAID but only an “Array of Independent Disks”.

Thanks to the technology of mirroring RAID 1 has a high reliability. The data is simultaneously written to all (usually two) hard disks. Two identical disks provide a full-value redundancy. If one disk fails, the other can supply all data. However, a RAID 1 is not an alternative for a data backup. Errors, such as viruses or accidental deletion of files, are immediately transferred to the mirror plate. The storage capacity of a RAID 1 is as large as the smallest hard disk involved.

A RAID 5 requires at least three hard disks. It allows increased speed and a bit security. As with RAID 0, the data is distributed in blocks over all drives. In addition, the necessary information for restoring the data (the so-called parity information) of another drive is stored on each disk. If only one hard disk fails, the data can be restored. The possible storage capacity is calculated from the number of disks minus one, multiplied with the capacity of the smallest disk. For three disks, each with 1 terabyte storage, this would for example be 2 TB.

RAID 10 is a combination of 1 and 0. This way it can combine both advantages and thus offers more speed as well as a high level of security. This requires at least four drives. Two disks are linked to RAID 1. These sets are then combined to RAID 0. This variant is very safe because in each set one disk can fail. However, only half of the total storage capacity is available.

Since a RAID level requires at least two disks it is only available for certain spo-comm PCs. These include the spo-book EXPANDED Q170, spo-book NINETEEN Q170 and spo-book NOVA CUBE Q87. If you have any questions concerning your application, please do not hesitate to contact us. Otherwise just let us know in your order if you require either RAID 0 or 1. The spo-book EXPANDED Q170 has an adaptable 330 x 70 x 290 mm case and a 16x PCIe slot. Using this to install a multi-view graphics card, for example, makes it possible to connect up to 9 screens without an additional card as HDMI, DisplayPort and VGA can each handle up to 3 displays. Thanks to the triple display feature and two audio ports, the mini PC is perfect for digital signage applications. Along with an optional optical drive for DVDs or Blu-rays, there is also space inside the mini PC for up to two HDDs or SSDs that can also be set up with a RAID configuration.

spo-book NINETEEN: the name says it all

The spo-book NINETEEN Q170 comes in a 1U rack-mount case. The standardised dimensions enable the mini PC to be fitted in 19 inch racks using optional slide rails. The generously-sized 482.6 x 378.8 x 43.9 mm case allows a 16x PCIe expansion card to be installed and also has space for an optical drive, two 3.5” and one 2.5” hard drive. Of course, up to three solid-state disks can be fitted instead. The three drives together allow for several terabytes of storage capacity. Those who value security can also configure the storage media to use RAID.

The spo-book EXPANDED Q170 is the perfect solution for customers in the professional audio and video sector who need outstanding performance and want to connect multiple displays, while those looking for a powerful and robust yet slim rack-mount system should take a closer look at the spo-book NINETEEN Q170. Both mini PCs are available now and can be ordered in the desired configuration at spo-comm.de.

##Order a spo-book EXPANDED Q170 or request a test sample

##Order a spo-book NINETEEN Q170 or request a test sample

Not one but two spo-comm systems have received a well deserved update: the spo-book EXPANDED Q170 and the spo-book NINETEEN Q170 have been equipped with powerful Intel Skylake processors and DDR4 memory.
Read more The passively cooled hardware is protected by a robust metal housing. Customers can choose from a range of two processors (Intel Dual Core G1820TE or Core i5-4570TE). And depending on which events customers want to be displayed, it is possible to show different contents on up to three monitors at the same time.

Up to four expansion cards (1 x PCIe 16x and 3 x PCI) can be integrated and the temperature range also leaves nothing to be desired: No matter if it is up to -10°C cold or up to 50°C hot, the NOVA CUBE Q87 does its work conveniently. The wide range power connection from 9 up to 32 volts promises even more flexibility, a power supply unit for 110/220 volts is available optionally. The German Federal Environment Agency has introduced a 6-point plan for the sustainable and resource-efficient use of computers in workplaces. An essential part of the recommendation is to provide stationary workstations with Mini-PCs. These are characterized by lower power consumption and thus also have fewer greenhouse gas emissions. In addition, the physical life is considerably longer compared to laptops. Long-term availability facilitates the installation and setup of the systems, since the same platform can be used over the years.

After the news about the high-end processors of the Kaby Lake generation, Intel has now unveiled the cheaper models, which are also manufactured in the 14nm process. The Celeron and Pentium processors with two or four Goldmont CPU cores and a TDP of 10 watts are internally labeled as Apollo Lake. They are much faster than their predecessors and suitable for use in Mini-PCs. First spo-comm models with the new Atom technology are planned for 2017.

Even smaller and even faster: M.2 SSDs

Solid State Disks in M.2 format are increasingly used in embedded and industrial PCs. An advantage over the standard SSDs in 2,5” size is the much smaller form factor. Furthermore the integrated SATA 3 port provides faster transfer rates than previous card formats. From 2017 on M.2 SSDs will also be part of spo-comm PCs.

Meanwhile Microsoft published detailed information concerning the licenses of Windows IoT. The former Windows Enterprise is now divided into three licenses: Entry, Value and High-End. These depend on the built-in CPU.

News in October: Intel has unveiled new Atom chips, SSDs in M.2 specification are increasingly available and the German Federal Administration recommends the use of Mini-PCs as desktop computers.
Read more
Stay up-to-date with the spo-comm newsletter.
We use cookies. Some of them are technically necessary (for example for the shopping cart), others help us improve our website and to offer you a better user experience.