What is ray tracing?

Since Nvidia released its Turing graphics cards, the term ray tracing has been on everyone's lips - at least in our IT bubble. We tell you what stands behind the term and what the new graphics chips can really do. 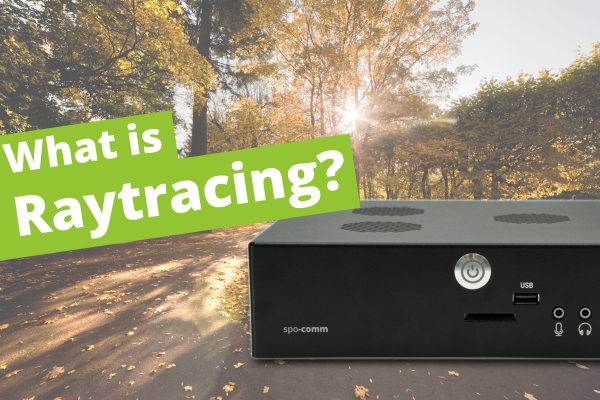 The term ray tracing refers to an algorithm to calculate images. The aim is to represent the three-dimensional world in a two-dimensional image by simulating the physical behavior of light and light rays. The combination of reflections, light and shadow ensures a particularly realistic image in PC games or animated films.

Before the development of ray tracing, the so-called rasterization was used. However, this only calculates light and objects that can be seen directly in the image. What’s special about ray tracing is that even invisible objects or light sources are analyzed and calculated, for example the sun in the sky, which is not visible in the image, but is reflected in a puddle. Or light rays that are reflected by a window that is outside the visible area.

How does ray tracing work?

If you want to learn more about the different ray tracing methods, you can find a good explanation in this video by Nvidia.

Where is ray tracing used?

This render approach is not new and has been used in cinema films or in advertising for a long time. This is called CGI (Computer Generated Imagery) - a technique that also manages to make artificial images look real.

The RTX graphics cards from Nvidia enable real-time ray tracing and are therefore suitable for PC games. However, the rendering takes a long time, which is why the Turing graphics chips would be overwhelmed with complete game scenes. Nvidia therefore relies on hybrid rendering and mixes ray tracing with rasterization.

What hardware do I need for ray tracing?

The previously mentioned Nvidia Turing graphics cards, i.e. the RTX-2000 models, were specially developed for ray tracing (hence the “R” in “RTX”). Thanks to its own ray tracing cores, you can calculate this in real time. With the appropriate new drivers, ray tracing is also possible with the Nvidia GeForce GTX 1000 graphics cards. However, good performance is not expected here. On the software side, Windows 10 with the DirectX 12 ray tracing API DXR version 1809 is required.

If you are looking for a robust industrial PC for demanding graphics applications, our KUMO V is the right choice. It is equipped with an Nvidia GeForce RTX 2060 - with 6GB integrated GDDR6 memory and 1920 CUDA cores. In addition to real-time ray tracing, the mini PC offers AI computing power and new shading technologies. Hence we leave nothing to be desired.