CPUs are not always the same. Depending on the device in which a processor is installed, different characteristics with regard to performance, power consumption or waste heat are important. Which types there are and what distinguishes them, will be clarified in this article. 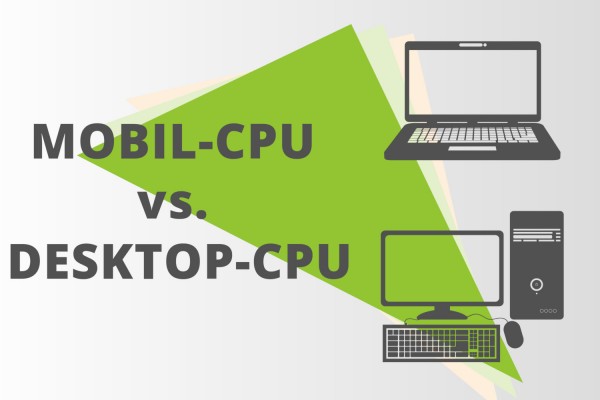 What is a desktop CPU?

A desktop CPU is, as the name suggests, usually built into a desktop PC. Therefore, heat development and power consumption play a minor role. On the one hand, there is enough room for fans and a cooling airflow, and on the other hand, there is no battery runtime that has to be taken into account, as desktop PCs are permanently connected to a power supply. In return, desktop processors offer good performance, a bigger cache and more turbo.

The Intel Core i processors (e.g. i3/i5) comprise both mobile and desktop CPUs. These can be recognized by the one or two letters at the end of the product name. These include, for example:

An explanation of the structure of the processor names can be found at Intel.

AMD uses entirely different names for its CPUs or APUs ("Accelerated Processing Unit" refers to a main processor with an integrated coprocessor – usually the GPU – which supports the main processor and can also be superior to him). The series carry certain names. Most of the desktop processor series also have a mobile variant, which then has the corresponding name. Among the current AMD desktop CPUs are:

What is a mobile CPU?

For mobile processors efficiency is more important than performance. The standing out feature is a low power consumption, since, for example, notebooks are not permanently connected to the power outlet and must therefore be able to run only with battery. In addition, they have less performance than desktop CPUs, because a lot of performance also means a lot of heat, and mobile devices offer little space for fans and heat loss. Nonetheless, thanks to modern technology, there are also mobile processors that are suitable for 4K gaming and other high-performance applications.

The Intel Mobile processors include the following series:

But even among the Celeron and Core-i CPUs there are mobile processors that are identified by the following letters, among others:

Which CPU is suitable for what?

Typically, desktop CPUs are installed in desktop PCs, while mobile processors are used for notebooks, ultrabooks and Mini-PCs. However, as desktop CPUs are getting more and more power efficient, they are more and more being installed in laptops. In addition, the manufacturers also offer server and embedded CPUs. While the former are similar to the desktop CPUs, but offer even more power, the latter are characterized by their long-term availability.

Due to their characteristics, Mini-PCs often incorporate mobile CPUs that consume much less power and generate less heat. However, many applications require good performance, so many spo-comm Mini-PCs are also equipped with desktop CPUs. These include the KUMO V and KUMO Ryzen models for high-end graphics applications, the rugged outdoor and vehicle PCs RUGGED GTX1050 Ti and RUGGED Ryzen, as well as a few models where the CPU is even freely selectable: CORE 2, NANO H310 and NOVA CUBE Q87.

Passende Blogartikel
What is an Embedded-CPU?
Industrial PCs part 3: The standard and...
What is the chipset? After we recently explained the difference between mobile and desktop CPUs, we would now like to go into a third type: the embedded CPUs.
Read more We now know, thanks to part 1 and part 2, why metal housings and energy efficiency are so important for industrial PCs. The third part of our series is about the use of Mini-PCs in the so-called extended temperature range. Get your winter jackets and sunscreen ready, it is going to be freezingly hot!
Read more What is the chipset?

A Mini-PC has many different components that have to be controlled. This task is taken over by the chipset. Because the chipset is such a big part in a Mini-PC, we want to explain how it is built up and what the chipset is responsible for.
Read more
Stay up-to-date with the spo-comm newsletter.
We use cookies. Some of them are technically necessary (for example for the shopping cart), others help us improve our website and to offer you a better user experience.