The well-known BIOS is more and more being replaced by its successor UEFI. So it’s time to take a closer look at this UEFI and its benefits. 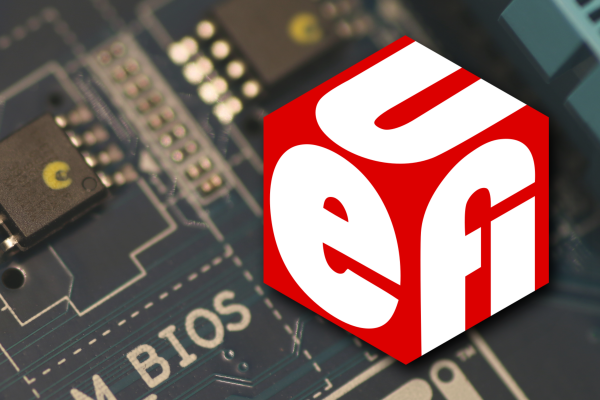 The abbreviation UEFI stands for "Unified Extensible Firmware Interface". It is the successor to the BIOS (Basic Input/Output System) and much easier to use. UEFI is an interface between the firmware, the individual hardware components of the computer and the operating system. UEFI has the same basic functions as the BIOS. It initializes the hardware, tests the individual hardware components and initiates booting the operating system.

How was UEFI developed?

BIOS was developed in the seventies for the first IBM PC released in 1981. So it’s not surprising that it’s already getting old. Since it is not 64-bit-compatible and because of other reasons, BIOS no longer meets the requirements of newer hardware. As a result, Intel took the first step and developed the successor EFI, which was specified in 1998. To further develop EFI, the Unified EFI Forum was founded. Among Intel, AMD and Microsoft, also other manufacturers belong to it. The first version of UEFI was released in 2006. Since Windows Vista it is supported by Windows.

What is Secure Boot?

Probably the most important new feature of the UEFI is Secure Boot, which increases the security of booting. It prevents malicious software from being loaded during the boot process, which then manipulates or attacks the computer. This is done via a digital key, the bootloaders and programs must identify with. If software exits, which cannot be authenticated, the start of the system is prevented.

What are the benefits of UEFI?

What are the disadvantages of UEFI?

How do I get into UEFI?

If you want to get into the UEFI, on most computers you have to press the “delete” Key several times in quick succession directly after switching on the PC. If this does not lead to success, it is worth looking into the manual. Sometimes it is another key that allows access to BIOS or UEFI.

What is BIOS?
Should I take an actively cooled or passively...
What’s new? The 5G standard, a new AI and USB 4 The USB Promoter Group recently announced the new USB 4 standard. This version is based on Thunderbolt 3 and allows sensational data transfer rates of up to 40 GBit/s, which is twice as much as the current version USB 3.2 Gen2x2. The background: Intel hands over its Thunderbolt specification to the Universal Serial Bus Implementers Forum (USB-IF). In the future, manufacturers will be able to produce suitable chips without paying the license fees that Thunderbolt requires. So far, it is also certain that USB Type C is required in any case. In exchange, the new port can also transmit DisplayPort 1.2 as well as HDMI signals and charge devices with up to 100 watts. It is still unclear, when the first devices with USB 4 will be developed. Maybe with Intel’s new CPU generation Ice Lake, which should come in late 2019.

At the Mobile World Congress (MWC) in Barcelona, the new 5G mobile communications standard was one of the big topics. Samsung, Huawei, LG and other manufacturers have already introduced smartphones that support 5G. But what is the current status? The 5G standard is the successor of 4G/LTE and builds on this. With data rates up to 20 Gbit/s, 10x LTE speed will be achieved. In Germany, there will be the first mobile networks from 2020 onwards, but the priority is initially to open up remote locations. A faster mobile network is less important at first. To make matters worse for the expansion in Germany, the auction of 5G frequencies is delayed. Due to the strict supply requirements, the major mobile operators Telefónica, Vodafone and Telekom have requested to stop the auction.

In the last few weeks, two exciting fairs took place in our area, which we didn’t want to miss. At the end of February, several colleagues from sales, marketing and technology visited the Embedded World in Nuremberg. There we learned about the latest trends in the industry and met a few of our customers and partners.

In mid-March, our marketing team went to the Internet World Expo  in Munich. Here we mainly used the extensive lecture offer and heard great speakers on topics such as SEO, SEA, UX and content marketing. We took many new ideas and suggestions with us and will definitely implement some of them in the coming weeks.

At the end we want to tell you about a topic that shows the exciting possibilities of artificial intelligence and has fascinated us very much: the website ThisPersonDoesNotExist.com. With each refresh it shows a new face, that was artificially created using AI, but looks so realistic, that it cannot be distinguished from a real photo. The algorithm used here uses a so-called GAN (generative adversarial network), which creates new fake examples from a large set of real images. The StyleGAN algorithm was developed by NVIDIA and published last year as open source.