It’s time for some news: As CPUs get smaller and smaller, Nvidia’s RTX graphics cards are getting better and better. Keyword: Raytracing. In addition, Microsoft has done some research about the current status of the Internet of Things. 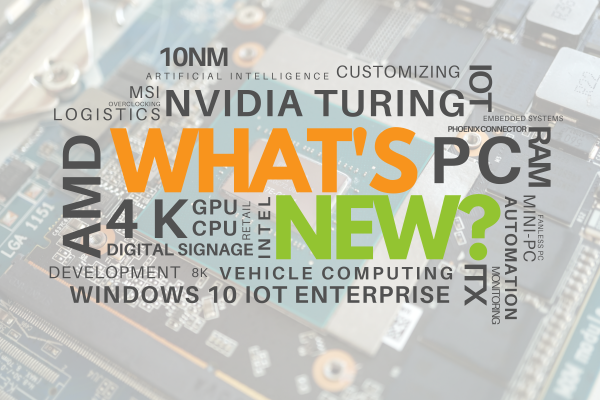 Waiting is over: Intel’s 10nm chips are coming

After years of delay, Intel has finally started the production of 10 nanometre processors. The first Ice Lake CPUs are going to be installed in notebooks and will go on sale in the fall of 2019. What are the new processors capable of? In contrast to chips from 14nm production, they are on the one hand more energy-efficient, but at the same time considerably more powerful. This includes better graphics, WiFi 6 support, the ability to connect four Thunderbolt 3 ports and a built-in AI. The CPUs that have already been produced belong to the U and Y series. But Intel makes it a bit more complicated and doesn’t name them clearly anymore. More about this can be found at Tom's Hardware. Incidentally, Intel is already planning 7nm chips, which should come out in 2021.

AMD’s current business figures are impressive. The Ryzen 3000 CPUs, which were launched in early July for the desktop segment, have started successfully. Not least thanks to their good performance and low power consumption. However, the demand for the processors Ryzen 9 3900X and Ryzen 7 3800X is so high that they currently have a limited availability. AMD stated that they did not expect such success. A subsequent delivery should be made shortly. Furthermore, AMD announced that a high-end graphics chip based on the RDNA architecture (this includes the current "Navi" chips) is currently being developed, and that mobile CPUs from 7 nanometre production will also be released soon.

To show the possibilities of the new Turing graphics cards, Nvidia has come up with something special. The 2014 demo video of the moon landing, with which Nvidia already wanted to prove that the mission of the Apollo 11 really took place, was expanded with Raytracing and now also shows how the light conditions actually were at the time of the moon landing. The graphics card manufacturer has examined various details, such as the material of the spacesuits and the dust on the lunar surface. For the video, several millions of virtual solar rays, which are reflected by the moon and cast shadows, were calculated by Raytracing.

More acceptance for the Internet of Things: The Microsoft IoT Signals Report

In their IoT Signals research Report, Microsoft gives us a large overview of the distribution of the Internet of Things. More than 3,000 decision makers around the world were interviewed and the results speak for themselves: Of the 85 percent of respondents who already carry out their own IoT projects, 88 percent consider them crucial to the success of their business. However, 97 percent of respondents expressed security concerns. Further challenges are the complexity of the technology, the shortage of skilled workers and sometimes too high costs. Nonetheless, market researchers at the IDC expect, that by 2015, 41.6 billion devices will be connected. 8 May 2019 Array ( [id] => 415 [title] => What’s New? The end of Windows 7, spo-comm at the Nürnberg Digital Festival & Nvidias Development Kit [authorId] => [active] => 1 [shortDescription] => Our news for May have plenty to offer: We say goodbye to Windows 7, but Hello to the Nürnberg Digital Festival and we discover a new Nvidia beginner’s platform. [description] =>

Windows 7 – The end has come

We already mentioned in our news in June last year, that spo-comm can only support Windows 10 for new systems.

Now the time for all the other Mini-PCs has come, too. The Windows 7 SB versions are no longer available. The spo-comm Mini-PCs can from now on only be equipped with Windows 10 (IoT) or – after consultation – with Windows 7 Embedded.

At the Nürnberg Digital Festival we will be organizing an event all about the topic Artificial Intelligence. Here the participants can experience and learn what Nvidias programming technique CUDA has to do with AI and Deep Learning. More information about our guest speakers, the application examples of our customers and the event in general, we have put together in another blog article.

As the name suggests, Nvidia brought a new board for developers to market. It is called Jetson Nano and has four ARM processing cores with 1.43 GHz as its centerpiece. These are combined with a 4GB high LPDDR4 RAM. The Developer Kit only comes up with 5 Watt power consumption. The Jetson Nano also is equipped with 128 CUDA cores with which 4K@60 Hz videos can be encoded in the H.264 standard and decoded in the H.265 standard.

The Jetson Nano has – despite its small dimensions of only 100 x 80 x 29 mm – next to a passive cooling system also many different connectors. These include five USB ports, one of them Micro-USB, one HDMI and one DisplayPort for connecting monitors, as well as a Gigabit LAN port. With the CSI-2 a camera can be connected, too, and a microSD card slot is also available.

Find more information about the Jetson Nano here and in this video. As the name suggests, the KUMO Ryzen has an AMD Ryzen V1807B CPU with 4 x 3.35 GHz (up to 3.8 GHz) as its centerpiece. Because the special construction of this processor combines the CPU with the GPU power, a very high computing power is ensured. Thanks to this particular feature also the processing of multimedia content is not inferior to a dedicated graphics card. These features are combined with an up to 32 GB big DDR4-RAM and two up to 500 GB or 960 GB big HDDs respectively SSDs. Like this, challenging digital signage applications are possible.

With dimensions of only 180 x 210 x 55 mm (W x D x H) the housing of our KUMO offers a lot of different interfaces. The most important for the digital signage field are probably the four DisplayPort 1.4, which can be found on the back panel of the KUMO. In combination with the integrated graphics unit AMD® VEGA 11 content in a resolution of 3840 x 2160 @ 60Hz can be played on up to four displays at the same time.

The interfaces of the KUMO Ryzen appear in the usual KUMO design. Next to the centered power button the front panel offers two of the four USB 2.0 ports. The other interfaces are located on the back panel. These include on one hand four other USB ports – two times 2.0, two times 3.1 – and on the other hand two audio and two LAN-ports can be found. In addition to this two COM ports are located on the back. The lateral placed Kensington Lock also guarantees theft protection. Thanks to the two integrated M.2 ports WiFi is optional.

From Windows 10, to IoT Enterprise to Linux Ubuntu

The options for the software of our KUMO Ryzen are also worth a look: The system can be equipped with the operating systems Windows 10 Home, Professional and Linux Ubuntu. Using Windows 10 IoT Enterprise even different adjustments – depending on the customer request – can be realized. 7 Aug 2019 Array ( [id] => 441 [title] => Multi-monitor with AMD Ryzen™ and Radeon™ Vega [authorId] => [active] => 1 [shortDescription] => For the last part of our multi-monitor series we want to take a closer look on the settings for the multi-monitoring with AMD and what special features these graphic chips have. [description] =>

At the beginning of 2018 the first AMD Ryzen™ desktop processors with integrated Radeon™ Vega graphics card were released. Due to this all-in-one solution customers no longer need separate processors and graphics cards – perfect for everyone, who uses desktop devices and appreciates high performance. According to AMD, the Ryzen™ processors with Radeon™ Vega graphics card “deliver powerful multiprocessing out-of-the-box” due to the 4 cores and up to 8 processing threads. In addition to this, they also provide a high level of responsiveness in applications that use the GPU acceleration. (Source: amd.com)

The easiest way to duplicate or extend the screen when using an AMD graphics card is – as well as for Intel and Nvidia – via the Windows settings. These can be called up with a right click on the desktop either under the name “resolution” (Windows 7) or “display settings” (Windows 10). Those of you who want it even faster can use the short cut Windows and P.

For the multi-monitoring AMD provides a special feature, too. It is called Eyefinity and stands for a technology with which the screen can be multiplied. This technology is made for gamers and professional users and developers. Using the Radeon™ graphics cards, up to six displays can be connected.

The settings for Eyefinity cannot be found in the standard Windows settings, but in AMD’s own graphics card driver tool. Once this had the name Crimson and is nowadays called Catalyst Control Center – or short CCC. This tool can also be called up with a right click on the desktop. How an Eyefinity display group can be set up is shown in this video.

Next to the Embedded-GPUs AMD also provides separate graphic processors. You can find a summary of the desktop and mobile processors here. By using a native AGP interface, the GPUs can be inserted into PCI graphics cards. Also, the settings for the multi monitoring with non-embedded GPUs is identical with the ones that are mentioned above.

The product portfolio of spo-comm provides two AMD based Mini-PCs. On one hand we have our passively cooled RUGGED Ryzen that can play content in a resolution of 4K@60Hz on up to four displays at the same time. This is ensured by its Ryzen V1807B CPU with integrated Vega 11 GPU. On the other hand there is our KUMO Ryzen, which is the AMD counterpart to our best seller in the digital signage field KUMO IV. This Mini-PC is also equipped with a performant Ryzen V1807B processor and the Vega 11 GPU. Using its four DisplayPorts the system is perfectly made for the use in digital signage applications in the high end field.