Half of the year has passed and in the IT market things are going wild. In this article we talk about Microsoft, who are shutting down Windows 7 updates for Kabylake CPUs. Also we want to mention the new AMD embedded CPUs that set new benchmarks regarding high performance. 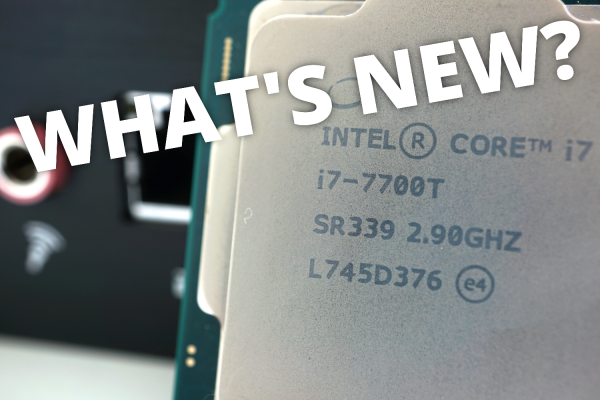 With their latest embedded CPUs, that are called Ryzen, AMD sets a new benchmark and starts the fire against its competitor Intel. These CPUs are mostly made for embedded applications where high performance is a must. This counts for example for digital signage scenarios, which have to process high resolution 4K content. But also the use in smart robotics and in the field of vehicle computing. Furthermore these new AMD CPUs contain an integrated GPU, which complies with the latest AMD Radeon Vega architecture.

This year AMD drops a bombshell on the Computex: The chip developer from the USA announces that in this year they will bring professional Radeon-Intstrinct products based on Vega-20-GPU on the market. These are made with the 7nm process and especially for the B2B market. If consumer will get a taste of these Vega-20 products is still unsure. But what is totally sure is that even gamers will get the taste of them. In addition to this AMD didn’t say anything about the technical specifications. Only so much was released that there will be a memory extension of 32 Gigabyte HBM 2, which will – because of the four HBM2 stacks – increase the memory bandwith up to 4.096.

Yet last year Microsoft and Intel announced that the latest CPUs will only be supported with a current Windows – by which they mean Windows 10. This means, upon reversion, that there will no longer be a driver support for Kabylake CPUs that work under Windows 7 and 8.1. Skylake CPUs with Windows 7 still have support until 2020. Microsoft suggests upgrading to Windows 10 if you have a CPU that was released after August 2016. By this time the yet mentioned Kabylake generation is concerned as well as the Coffeelake generation from October 2017.
Due to this also spo-comm provides only Windows 10 support for new Mini-PCs. 26 Jan 2018 Array ( [id] => 314 [title] => What’s new? CPU issues „Spectre“ and „Meltdown“, no more extra charges for cashless paying methods and new DIN RAIL brackets for our BRICK series [authorId] => [active] => 1 [shortDescription] => With some interesting news we’re starting the year 2018. This article concerns three topics: First of all the CPU issues called “Spectre” and “Meltdown”. Furthermore we will explain why we charge no more extra fees for cashless paying methods, and we will show you the new DIN RAIL clamps for our spo-book BRICK series. [description] =>

With the beginning of 2018 one big problem in the IT field came up: The security holes Spectre and Meltdown, which were found in processors, especially in those by Intel. Skillfully attackers, exploiting these vulnerabilities, are able to extract data that the computer processes in its memory – including passwords. We at spo-comm are dealing with the currently emerging problems and are working on their solutions with our partners.

You will find a news ticker on our website soon, where you can get the most recent information about this topic. This way you will always stay up to date! You can also learn which of our Mini-PCs are affected and how we act against these issues.

No more Surcharging: Extra costs for cashless payment are eliminated

Since January 13th it is prohibited for merchants across the EU to charge any extra fees for cashless paying methods. This so-called “Surcharging” was used when a customer paid by credit card, SEPA direct debit or bank transfer. Although not initially affected by the "Surcharging" prohibition, PayPal also changed its terms and conditions on January 9th which now stipulate that merchants are not authorized to charge extra fees when a customer wants to use the PayPal services as a paying method.

What this means for our customers is, that even though this prohibition was made for the B2C field, as of now you will no longer pay any extra charges if you want to pay via PayPal or credit card in our online shop.

For our BRICK series are now new clamps for DIN RAILS available. These clamps are screwed onto a fitting VESA mount and enable therefore the installation of the Mini-PC into switch cabinets. The rails can be directly selected while configuring your Mini-PC. 22 May 2018 Array ( [id] => 330 [title] => NEW: spo-book WINDBOX III EVO – Configuration diversity for every application field [authorId] => [active] => 1 [shortDescription] => Together with the Taiwanese partner MSI IPC the spo-comm developed a new Mini-PC from the well-known WINDBOX series. We present to you: The WINDBOX III EVO. With the already existing quality of the WINDBOX series that stands for a versatile application scenario, its reliability and an unbeatable price, the new model of this line convinces us, too. [description] =>

As well as the predecessor models, the WINDBOX III EVO has the measurements 300 x 196 x 30 mm and can still be mounted behind monitors or under office desks by help of the standard VESA-mountings (see also “What is VESA?”). It also has the same weight as the older models which makes it really easy to integrate the PC into already existing systems.

Our new spo-book WINDBOX III EVO is equipped with a seventh generation Intel Core i5 processor that works with up to 3,1 Gigahertz and is supported by a RAM where you can choose up to 32GB. Thereby demanding multi monitoring is possible but also single running applications can use the CPU performance perfectly. The main feature of the WINDBOX is still the passive cooling system: Absolute silent working in places where this is totally necessary is no problem. With the wide range temperature from -10° Celsius to 50° Celsius and the completely closed metal housing, through which dust and dirt can’t reach the interior, this Mini-PC can be used for applications with difficult conditions. The high quality of the components makes sure the Embedded-PC can be used 24/7.

Interface diversity for every application field

With the large amount of video outputs the WINDBOX III EVO conquers the Digital Signage field in a new way: One DVI- and two DisplayPort-interfaces can control up to three monitors at the same time – no matter if you want to play the same or different content (see also “VGA, DisplayPort, HDMI, DVI – what’s the difference between these multimedia interfaces?”). The high claims of this application field are for sure fulfilled by this Embedded-PC: Without any delays 4K-content can be played. The standard of 1080p in the Digital-Signage field is also removed by this.

The high variety of interfaces guarantees that the WINDBOX III EVO can work together with already existing configurations. Due to two Gigabit-LAN-interfaces and an optional WiFi and Bluetooth network connections can be made, but also wireless data transfer is possible.

Equipped with 6 USB ports – four of them after the latest 3.0 standard – the Mini-PC can be connected to numerous systems and external storage media. By choosing your desired configuration the WINDBOX III EVO can be adapted to every application scenario.

As of now, Intel and Microsoft do not longer provide a driver support for Kabylake-CPUs with Windows 7. For our customers this means that in the future we only offer support for Windows 10.

With immediate effect you can configure, test and buy our new WINDBOX III EVO on our website. 27 Oct 2017 Array ( [id] => 292 [title] => From WINDBOX and CORE to KUMO – The series of the spo-comm Mini-PCs [authorId] => [active] => 1 [shortDescription] => Learn more about our spo-book series and in what fields they can be found. At the moment our product range offers 15 different Mini-PC series, to which we want to introduce you now week by week, starting with the series of our spo-book BRICK! [description] =>

Today: The BRICK-series – Our champion in the Kiosk field

With their solid housings, passive cooling systems and up to six COM interfaces, the spo-book BRICK i3 and the spo-book BRICK J1900 represent the perfect Mini-PC that can resist even adverse circumstances.
If this wouldn’t be enough: The low power consumption and the opportunity to work completely silent with the help of SSDs is integrated in the price.

Does that sound interesting?

##Explore all Mini-PCs of the spo-comm product range