In addition to the new interface Thunderbolt 3, this month we are dealing mainly with the subject of memory: Intel has introduced a new form factor called "ruler", SATA is no longer the best interface for SSDs and the memory shortage is far from over. 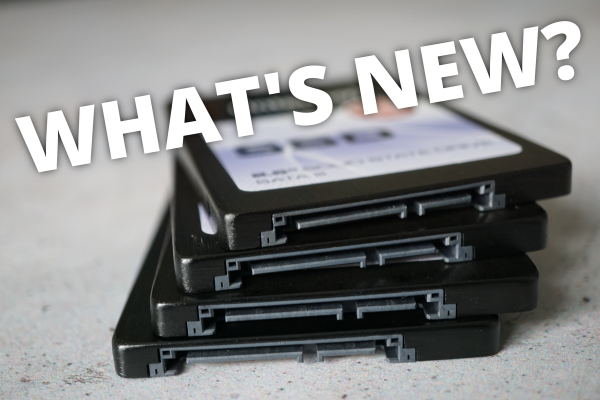 Intel Thunderbolt 3: One for all

Thunderbolt 3 is a multifunctional interface that is directly compatible with USB Type-C, but also supports DisplayPort and PCIe. For example, external graphics cards can be connected via PCI Express, while suitable connection cables allow to address various screen inputs. Thanks to a transfer speed of up to 40 Gbit/s it is even possible to reproduce two times 4K resolution, while simultaneously transferring data via USB 3.1. In order to promote and spread the interface, Intel has announced to make the standard royalty-free and release the specifications for the industry.

Variations of SSDs: The interfaces

For a long time the SATA interface was the standard for SSDs. However, since SSDs work differently than HDDs for which SATA was originally developed, a speed increase is no longer possible. This requires a whole new protocol. Depending on which interfaces are available on the PC, SSDs with SATA 6G, its further development SATA Express (SATAe), m.2 or PCI Express (PCIe) can be used.

Intel has recently introduced a new form factor for SSDs, which is named "ruler". As the name suggests, it has a long, flat shape. Thanks to the dimensions of 325.35 x 36.8 x 9.5 mm, up to 32 ruler SSDs fit into a 1U server. With a planned capacity of 32 TB per SSD (currently 16 TB), such a rack server would reach a storage capacity of 1 PB (petabyte). First SSDs in the new "ruler" form factor are to be released by the end of the year, possibly there will also be modules with double height.

The fact that memory prices have risen considerably in the last month is well known. Unfortunately, there is still no end in sight – it is even expected to continue like this in 2018 – as the most important manufacturers are using more and more parts of their production capacities for server and smartphone storage. Solutions to the problematic memory shortage would, for example, be a more efficient architecture or an adaption of the firmware and software in order to improve the use of existing memory. More considerations on this subject can be found here. 17 May 2016 Array ( [id] => 188 [title] => What is the difference between HDD and SSD? [authorId] => [active] => 1 [shortDescription] => All spo-books can be configured as desired and can be ordered with an HDD or SSD. This brings many customers to the scratch which choice is the best for them: The standard 500 gigabyte sized HDD or the more expensive SSD? We want to bring a little light into the darkness. [description] => The next PCIe generation is soon to be completed: The PCI-SIG (Peripheral Component Interconnect Special Interest Group) has introduced version 0.9 of the new 4.0 standard, which is expected to double the data rate compared to current PCIe 3.0. However, that PCIe 4.0 will actually be installed in systems, can take until 2019. Nevertheless, the PCI-SIG has also already promised the standard 5.0, once again with a doubling of bandwidth. We will see, when this will be found in our Mini-PCs.

Due to the current hype around mining the cryptocurrency Ethereum, powerful mid-range graphics cards like Geforce GTX 1060 and 1070, as well as Radeon RX 580 and 570, are sold out and can be, if at all, only purchased for high prices. Fortunately our high-end Mini-PC spo-book KUMO IV is not affected. The GTX 1060 is already integrated on the mainboard.

Recently the USB 3.0 Promoter Group has introduced a new standard. USB 3.1 is now followed by 3.2, which should result in doubling the data rates to 20 Gbit/s. In order to achieve these transmission rates, of course, all devices and cables used must meet the new standard. Until the first devices will be equipped with USB 3.2 ports, however, it can take another year. But the goal of the new version is already public: The flexible USB Type C port should become standard in the PC industry and replace the widely used Type A interface. We will see, if this will be that easy.

Anyone who needs help with the startup or mounting of his spo-book, or with BIOS settings like Wake On LAN or Restore on AC Power Loss, can now get help easily. From now on, quick guides for almost all spo-comm Mini-PCs are available on our website. They can be downloaded on the product page under the tab “Product details & downloads” and can also be found on our driver sticks. 11 Jul 2017 Array ( [id] => 272 [title] => What’s new? SSD trends, Intel i-8000 and branding for Windows 10 IoT [authorId] => [active] => 1 [shortDescription] => SSD manufacturers rely more and more on PCIe instead of SATA and Intel has introduced a new CPU of the Core i-8000 generation. In addition to these news of the Computex, we have also new stuff at spo-comm: more accessories for the MOVE series and a customizing package for Windows 10 IoT Enterprise. [description] =>

SSD trends of the Computex: TLC and M.2

PCIe instead of SATA – this trend was clearly visible at this year’s Computex in Taipei. As manufacturers are not making any progress on the speed of SATA SSDs, the future lies with the much faster PCIe SSDs like M.2. In addition, the IT fair has shown, that cheaper SSDs are now increasingly using TLC memory with 3 bits per cell.

From now on, spo-comm offers even more accessories for the two current vehicle PCs spo-book MOVE QM87 and spo-book MOVE N3160: A GPS module for navigation and geolocation as well as a CAN bus for special vehicle applications.

Another innovation introduced at Computex is a quad-core processor of the Intel Core i-8000 generation. The special thing about it: With a TDP (thermal design power) of just 15 watts, turbo clock speeds of up to 4 GHz are to be achieved. The i7 CPU is scheduled to come onto the market in the fall of 2017, delivering up to 30 percent more speed than the competing Core i7-7500U processor of the current Kaby Lake generation.

In order to make the most of the benefits of Windows 10 IoT Enterprise, spo-comm will soon offer a customizing package. This allows the adjustment of the operating system, so that you can appear as a manufacturer of the Mini-PC with your own logo, OEM information such as company name, website and telephone number, customized login screen and much more. The image, which has been adapted to your needs, is then safely stored with us and can be installed for future orders.