Just in time for the ISE, spo-comm introduces a new digital signage player for high-end graphics performance: the KUMO V. The newcomer is equipped with an Intel Core i5 processor and – what’s even more exciting - an Nvidia RTX 2060 graphics card. 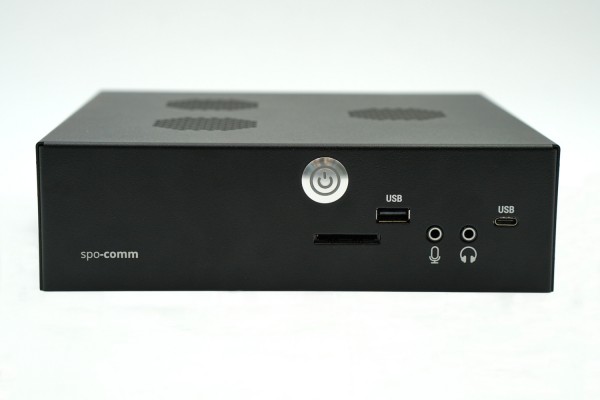 As usual, the new model of the popular KUMO series scores with a dedicated graphics card: an Nvidia GeForce RTX 2060 with 6GB integrated GDDR6 memory and 1920 CUDA cores. Thanks to Nvidia's Turing architecture, the Mini-PC offers real-time ray tracing, AI computing power and new shading technologies, that are made for ultra-high-performance graphics applications, virtual reality and innovative AI algorithms.

Being a graphics specialist, a resolution of 4 x 4K@60Hz is easy-peasy for the KUMO V. In addition to the graphics card, performance is ensured by an Intel Core i5-9300H QuadCore processor with 2.40 GHz (max. 4.10 GHz), which is supported by up to 32 GB DDR4 RAM. In addition, two mass storage media can be installed. One HDD or SSD with up to 960 GB and an m.2 SSD. All of this is packed in compact dimensions of 206 * 203 * 60 mm and can be easily installed using the included wall mount. A VESA mount is also available as an option.

The front of the industrial PC is presented in the usual simple KUMO design. In addition to the power button, there are only an SD card reader, two audio connectors (line-out and mic-in) and two USB 3.1 interfaces (one of which is Type C). The back has a lot more to offer: four USB 3.0, two LAN interfaces and, for multimedia, two HDMI 2.0, one DisplayPort 1.4 and another DisplayPort, which is implemented via a USB Type-C connection. Two antenna connectors complement the optionally available Wi-Fi. 14 Apr 2020 Array ( [id] => 411 [title] => Multi-Monitor with Nvidia GeForce and Quadro [authorId] => [active] => 1 [shortDescription] => A few weeks ago we already looked at how integrated graphics cards deal with Multi-Monitoring. Today it is all about the dedicated graphics cards GeForce and Quadro by Nvidia and what features they have. [description] =>

The series of GeForce cards by Nvidia is perfectly made for the use in the consumer field. The cards are supposed to provide ultimate PC gaming experiences. Due to the smooth replay of 4K content or even virtual reality applications, the cards can not only be used gaming but also for professional applications.

For the Quadro as well as the GeForce cards the feature Nview comes as standard. Using this feature, the screen can be used and designed much more efficiently and is thus, perfectly made for everyone who is working with different windows or a huge amount of data at the same time. The work can on one hand be distributed to many screens or, on the other hand, to virtual desktops on which can be toggled between by keystroke.

The Nvidia architecture CUDA is also standard for both these graphics card series. It is made to increase the processing power when applications are running parallel, for instance when editing images or videos. In this article we summarized more about CUDA.

Also at spo-comm you can find a Mini-PC with a GeForce graphics card. The RUGGED GTX 1050 Ti is equipped with the namesake GPU. It has 768 CUDA cores and can play content on up to seven screens at once.

Nvidia Quadro for workstations with MOSAIC

The name Quadro stands for a desktop graphics cards developed by Nvidia for the use in the creative and technology field. Next to a very performant graphics processor and a high storage, they also provide 8K display outputs just to give an example. With these features they ensure that professional workflows are sped up.

Only the Nvidia Quadro cards bring along this special feature called MOSAIC. It is designated to interconnect the displays to one group, so that they build one big screen. One significant benefit of MOSAIC is that the displays can be placed not only next to each other, but also in a grid. Depending on which graphics card is being used, grids of for example 2 x 2 screens can be realized. But the most important advantage is actually another one: With MOSAIC it is possible to disconnect one display during the application without the arrangement being dissolved or changed.

In the range of spo-comm Mini-PCs there are two systems with a Quadro graphics card. Our QUADRO P1000 is standardly equipped with the namesake P1000 with 640 CUDA cores and the NOVA Q170 can optionally be equipped with the P2000 with 1024 CUDA cores.

In 2018, Nvidia introduced its “revolutionary” Turing™ architecture. Together with the GeForce RTX™ graphics platform the GPUs offer real-time ray tracing, artificial intelligence and new shading technologies. The razor-sharp, realistic images and special effects are perfectly made for the gaming field, but they can also be utilised in professional digital signage applications.

Another detail of the Turing GPUs is the feature Nview which we already know from the GTX graphics cards. This feature is explained in the first section “Nvidia GeForce: Gaming cards for professional use”.

Our KUMO V, that was released in February 2020, is equipped with an Nvidia RTX 2060. This graphics card has 6GB integrated DDR6-RAM and 1920 CUDA cores. It provides an ultrahigh performance for graphics applications and also in the Virtual Reality field. Of course, on four displays at once with a resolution of 4K@60Hz.

As well as for integrated graphics cards, it is also possible with dedicated ones to duplicate the screen or extend the desktop. As we already mentioned in our last article of this series this can be set up via the screen resolution (Windows 7) or display settings (Windows 10). Where onboard cards only support a maximum of 3 displays, GeForce and Quadro can control up to 8.

Nvidia provides a website with a configurator that shows every connection possibility with a GeForce card.

To set up such specific features the graphics cards driver and the associated management tool is needed. Nvidia calls its own Nvidia Control Panel. How to set up MOSAIC with your Quadro card you can find here. 24 Mar 2020 Array ( [id] => 508 [title] => What is ray tracing? [authorId] => [active] => 1 [shortDescription] => Since Nvidia released its Turing graphics cards, the term ray tracing has been on everyone's lips - at least in our IT bubble. We tell you what stands behind the term and what the new graphics chips can really do. [description] =>

The term ray tracing refers to an algorithm to calculate images. The aim is to represent the three-dimensional world in a two-dimensional image by simulating the physical behavior of light and light rays. The combination of reflections, light and shadow ensures a particularly realistic image in PC games or animated films.

Before the development of ray tracing, the so-called rasterization was used. However, this only calculates light and objects that can be seen directly in the image. What’s special about ray tracing is that even invisible objects or light sources are analyzed and calculated, for example the sun in the sky, which is not visible in the image, but is reflected in a puddle. Or light rays that are reflected by a window that is outside the visible area.

How does ray tracing work?

If you want to learn more about the different ray tracing methods, you can find a good explanation in this video by Nvidia.

Where is ray tracing used?

This render approach is not new and has been used in cinema films or in advertising for a long time. This is called CGI (Computer Generated Imagery) - a technique that also manages to make artificial images look real.

The RTX graphics cards from Nvidia enable real-time ray tracing and are therefore suitable for PC games. However, the rendering takes a long time, which is why the Turing graphics chips would be overwhelmed with complete game scenes. Nvidia therefore relies on hybrid rendering and mixes ray tracing with rasterization.

What hardware do I need for ray tracing?

The previously mentioned Nvidia Turing graphics cards, i.e. the RTX-2000 models, were specially developed for ray tracing (hence the “R” in “RTX”). Thanks to its own ray tracing cores, you can calculate this in real time. With the appropriate new drivers, ray tracing is also possible with the Nvidia GeForce GTX 1000 graphics cards. However, good performance is not expected here. On the software side, Windows 10 with the DirectX 12 ray tracing API DXR version 1809 is required.

If you are looking for a robust industrial PC for demanding graphics applications, our KUMO V is the right choice. It is equipped with an Nvidia GeForce RTX 2060 - with 6GB integrated GDDR6 memory and 1920 CUDA cores. In addition to real-time ray tracing, the mini PC offers AI computing power and new shading technologies. Hence we leave nothing to be desired. 13 Nov 2019 Array ( [id] => 471 [title] => Industrial PCs part 1: The metal housing [authorId] => [active] => 1 [shortDescription] => In our small but fine series about the stars in our product catalog, it's all about what makes industrial PCs to what they are. Because industrial PCs (also called "IPCs") must fulfill special requirements in order to be considered as such. In the first part of our 5 part blog series, we will focus on the cases. Here we go! [description] =>

The housing: The armor of our industrial PCs

A key point where hardware for "consumer" differs from hardware for professional use, is the housing. Unlike consumer PCs, which are mainly protected by plastic housings, industrial PCs are characterized by solid metal housings. This ensures that the PCs themselves remain efficient in harsh environmental conditions, such as on construction sites, in emergency vehicles or in large machines. When it comes to designing the housing, special attention is paid to the fact that the housings have to be as resistant as possible to dust and other fine particles. But even with moisture, the motherboard, CPU, RAM and hard drive must be protected by the case, just like by an armor. Especially with actively cooled PCs, i.e. computers in which fans are installed, this resistance of the lifetime plays into the cards. At least with industrial PCs with passive cooling, as fanless systems, the metal housing is a must. Why this is so, we would like to explain with an example, our RUGGED GTX 1050 Ti.

Our RUGGED GTX 1050 Ti serves as a good example for the combination of robust appearance and a passive cooling system. The question of why a fanless construction is based on a metal housing, is easily answered: metal does conduct heat, plastic does not. Circuit traces made of copper ensure that the resulting heat in the case of the computer is led to the outside. So-called cooling fins, which lie on the top of a housing, then release the heat into the environment. Especially with a graphically powerful IPC, such as the RUGGED GTX 1050 Ti, it can lead to a high heat development in the housing. A well thought-out and flawlessly functioning fanless cooling system is therefore considered as an essential element.

In summary: Metal cases are so great because…

Any questions? Or maybe looking for a suitable industrial PC? Our consultants will gladly assist you!