We’ve just released our new RUGGED Q170 for the Vehicle application and outdoor scenarios and now we already come up with another new Mini-PC that’s even from the same series. The beauty is called spo-book RUGGED GTX 1050 Ti. Experts may guess what stands behind this Mini-PC just by reading its name: A super performant, robust PC with the High-End nVidia GTX 1050 Ti graphics card. This already can make digital signage fans’ and customers’ hearts skip a beat. And justifiably so. The combination of the well-known RUGGED characteristics and this graphics card let this Mini-PC surpass everything we had to offer the digital signage field so far. 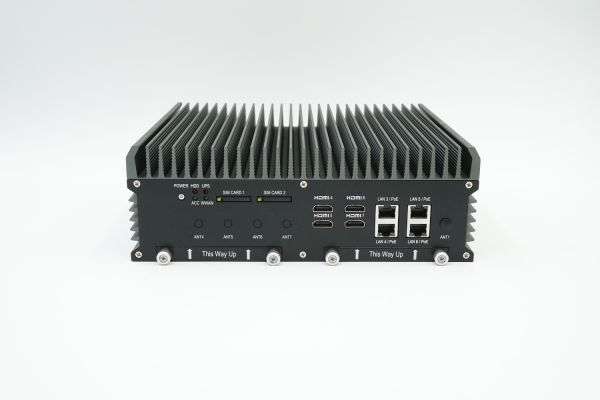 We don’t want to beat around the bush and directly explain you the main feature that the spo-book RUGGED GTX 1050 Ti has to offer: The namesake dedicated nVidia GTX 1050 Ti graphics card. One or another could already be familiar with this name, because our spo-book KUMO V has a similar graphics card obscured.
But what’s so special about the GTX 1050 Ti? With a memory of 4GB and a video RAM that goes up to 32GB content can be played without any judder – even in a resolution of 8K. Sounds good so far. Four of the seven HDMI interfaces, which are placed on the front, make a 8K video wall possible.

Our RUGGED GTX 1050 Ti stays loyal to the common theme of the RUGGED series. As well as its predecessor the Mini-PC is equipped with a sixth generation Intel® Core i5 CPU with a power of up to 4 x 2,3 GHz. With the passive cooling system and its massive metal housing, which we both know from the whole RUGGED series, using the Mini-PC for outdoor scenarios is absolutely no problem because dirt, dust or humidity can’t get inside the housing.  What speaks for outdoor usage also: The wide temperature range from -40° Celsius to +70° Celsius. In need of a 8K video wall in the ski area? No problem for our RUGGED GTX 1050 Ti.

We already announced the compatibility of the “new” RUGGED series with the application in vehicles when we released the RUGGED Q170. The RUGGED GTX 1050 Ti can intercept voltage peaks, which usually occur when starting a motor. Special with this Mini-PC is that it doesn’t only have the wide-range input from 9-36 Volts but can also intercept 48 Volt. As well as its younger brother the new Vehicle-PC is vibration and shock tested according to American military standards.

##See all of our RUGGED models Our RUGGED Q170 doesn’t only convince with its sixth generation Intel® Core i5 CPU or its free selectable RAM (up to 32 GB), but also with a feature, that is totally new in the history of spo-comm. Besides the usual application field of the RUGGED series – which is especially the outdoor use – the newcomer also conquers new areas of application.
Read more Nice to know: What is PoE – Power over Ethernet? There are so many options on how to play various content from a mini-pc on a display. Graphic cards provide a numerous amount of connection possibilities (outputs), which in turn face other inputs on the displays. Often that’s the reason for the cable chaos behind the monitors. In this article we will discuss which interfaces for transferring graphic contents are available, what the difference between them is, and which standards they meet.
Read more
Stay up-to-date with the spo-comm newsletter.
We use cookies. Some of them are technically necessary (for example for the shopping cart), others help us improve our website and to offer you a better user experience.