Our spo-book RUGGED Q170 doesn’t only convince with its sixth generation Intel® Core i5 CPU or its free selectable RAM (up to 32 GB), but also with a feature, that is totally new in the history of spo-comm. Besides the usual application field of the RUGGED series – which is especially the outdoor use – the newcomer also conquers new areas of application. 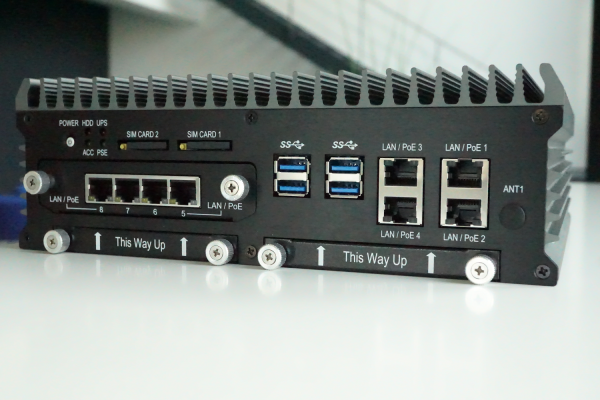 Just like the previous versions in the RUGGED series the RUGGED Q170 is best equipped for the outdoor field. Without any problems the Mini-PC can handle an extended temperature range from -40° Celsius up to +70° Celsius. With its passive cooling system and the robust metal housing the inner workings are perfectly protected from any environmental influences like dust and humidity. Besides the long known application under harsh conditions the spo-book RUGGED Q170 with its size of 250 x 55 x 150 mm is also made for the use in vehicles - thanks to its wide-range input (9 – 36 Volts), with which the Mini-PC can absorb surges. Furthermore the Industry PC is vibration and shock tested according to the American military standard – just like our MOVE series.

Flexibility due to the modular plug-in system

With the RUGGED Q170 it is possible to easily extend the amount of the interfaces. Due to the optional LAN module the four LAN ports can be enlarged to eight, which allows even complex network applications.

By using PoE (Power over Ethernet; see also "What is PoE?") there’s also the possibility to supply the four modularly expendable LAN ports with electricity. It is especially beneficial for the surveillance sector because with this feature it is possible to control up to four surveillance cameras – for example in the subway or at an airport – with only one Mini-PC.

Two Display Ports and a VGA connection allow independent image output on up to three monitors. Thanks to its Intel® HD Graphics 530 and the two Display Ports, even an output of 2 x 4K@60Hz is possible. In combination with its robustness the RUGGED Q170 is an interesting solution for the area of (outdoor) digital signage.

For those who don’t want to rely on just one network provider, you can also implement a multi SIM card in the spo-book RUGGED Q170. Thus, a broad network spectrum ensures that the industrial PC is always connected to a network.

##Order a RUGGED Q170 or request a test sample

##See all of our RUGGED models To control machines in warehouses or to automatize warehouse systems, Mini-PCs can be connected to those machines. Harsh working environments such as dust, moist air or, for example, sawdust bring Mini-PCs to their limits. For many of our Mini-PCs even such conditions are no problem.
Read more In an industrial environment data loss is often a critical point. If you can’t rely on a uninterruptible power supply (UPS) for reasons of cost or space, there’s a new possibility to provide more security: with so-called Powerguard SSDs.
Read more
Stay up-to-date with the spo-comm newsletter.
We use cookies. Some of them are technically necessary (for example for the shopping cart), others help us improve our website and to offer you a better user experience.