Together with the Taiwanese partner MSI IPC the spo-comm developed a new Mini-PC from the well-known WINDBOX series. We present to you: The WINDBOX III EVO. With the already existing quality of the WINDBOX series that stands for a versatile application scenario, its reliability and an unbeatable price, the new model of this line convinces us, too. 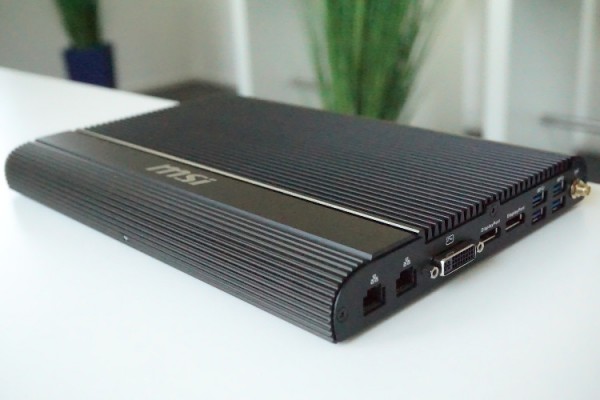 As well as the predecessor models, the WINDBOX III EVO has the measurements 300 x 196 x 30 mm and can still be mounted behind monitors or under office desks by help of the standard VESA-mountings (see also “What is VESA?”). It also has the same weight as the older models which makes it really easy to integrate the PC into already existing systems.

Our new spo-book WINDBOX III EVO is equipped with a seventh generation Intel Core i5 processor that works with up to 3,1 Gigahertz and is supported by a RAM where you can choose up to 32GB. Thereby demanding multi monitoring is possible but also single running applications can use the CPU performance perfectly. The main feature of the WINDBOX is still the passive cooling system: Absolute silent working in places where this is totally necessary is no problem. With the wide range temperature from -10° Celsius to 50° Celsius and the completely closed metal housing, through which dust and dirt can’t reach the interior, this Mini-PC can be used for applications with difficult conditions. The high quality of the components makes sure the Embedded-PC can be used 24/7.

Interface diversity for every application field

With the large amount of video outputs the WINDBOX III EVO conquers the Digital Signage field in a new way: One DVI- and two DisplayPort-interfaces can control up to three monitors at the same time – no matter if you want to play the same or different content (see also “VGA, DisplayPort, HDMI, DVI – what’s the difference between these multimedia interfaces?”). The high claims of this application field are for sure fulfilled by this Embedded-PC: Without any delays 4K-content can be played. The standard of 1080p in the Digital-Signage field is also removed by this.

The high variety of interfaces guarantees that the WINDBOX III EVO can work together with already existing configurations. Due to two Gigabit-LAN-interfaces and an optional WiFi and Bluetooth network connections can be made, but also wireless data transfer is possible.

Equipped with 6 USB ports – four of them after the latest 3.0 standard – the Mini-PC can be connected to numerous systems and external storage media. By choosing your desired configuration the WINDBOX III EVO can be adapted to every application scenario.

As of now, Intel and Microsoft do not longer provide a driver support for Kabylake-CPUs with Windows 7. For our customers this means that in the future we only offer support for Windows 10.

With immediate effect you can configure, test and buy our new WINDBOX III EVO on our website. Since almost 10 years spo-comm and MSI IPC have been working together. At the very beginning of this cooperation a new Mini-PC was launched – the WINDBOX. This series is celebrating its 10 year anniversary soon and we would like to share the WINDBOX’s story at spo-comm with you.
Read more Our spo-book RUGGED Q170 doesn’t only convince with its sixth generation Intel® Core i5 CPU or its free selectable RAM (up to 32 GB), but also with a feature, that is totally new in the history of spo-comm. Besides the usual application field of the RUGGED series – which is especially the outdoor use – the newcomer also conquers new areas of application.
Read more We’ve just released our new spo-book RUGGED Q170 for the Vehicle application and outdoor scenarios and now we already come up with another new Mini-PC that’s even from the same series. The beauty is called spo-book RUGGED GTX 1050 Ti. Experts may guess what stands behind this Mini-PC just by reading its name: A super performant, robust PC with the High-End nVidia GTX 1050 Ti graphics card. This already can make digital signage fans’ and customers’ hearts skip a beat. And justifiably so. The combination of the well-known RUGGED characteristics and this graphics card let this Mini-PC surpass everything we had to offer the digital signage field so far.
Read more
Stay up-to-date with the spo-comm newsletter.
We use cookies. Some of them are technically necessary (for example for the shopping cart), others help us improve our website and to offer you a better user experience.