To crown our series of articles about our product range we will introduce our WINDBOX series this week. The spo-book WINDBOX II Quad and the spo-book WINDBOX III Advanced stand for their versatile range of application, their reliability and their attractive price. The latest connectors such as HDMI or USB 3.0, a passive cooling system and a low power consumption are all integrated in these Mini-PCs and make it possible to use the WINDBOX in the industrial sector, as a digital signage player or in the logistics field. 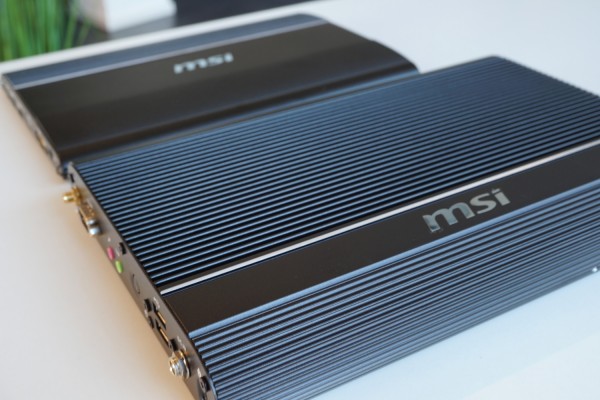 Our spo-book WINDBOX II Quad is already the fourth generation of the WINDBOX series that – as the name says – has a very high power through its four cores. The solid metal housing offers low power consumption, a passive cooling system and protects the Mini-PC against external influences. With its flat design the Mini-PC fits every surrounding, it can for example be assembled with monitors that have VESA mounts. USB 3.0, two network connectors, RAM up to 8GB and a processor that consumes a maximum of 10 Watts make the hardware of the WINDBOX II Quad up to date. Also in regards to the software this Mini-PC has its advantages: The WINDBOX II Quad is compatible with every Windows operating system starting at the 7th version, both for 32-bit and 64-bit systems.

Together with MSI IPC (Micro Star International) we developed the spo-book WINDBOX III Advanced. It is equipped with a passive cooling system which protects the Mini-PC from dust and dirt and allows to have a complete silent working atmosphere (see also “Should I take an actively cooled or passively cooled Mini-PC?”). Supported by a RAM up to 16GB the Core i5 processor with Broadwell core that works with up to 2,7 GHz meets any kind of requirements. The DVI and DisplayPort connectors of the WINDBOX III Advanced ensure playing the same or different content on up to three monitors even in 4K resolution.

##Explore all Mini-PCs of the spo-comm product range

If you have any further questions feel free to contact us! 22 Oct 2014 Array ( [id] => 130 [title] => spo-book WINDBOX II Quad: All good things come in fours [authorId] => [active] => 1 [shortDescription] => Never change a winning team: And true to this maxim, the mini pc forge provides – together with MSI IPC – the meanwhile fourth generation of the WINDBOX II series (MS-9A65) on the market which one is highly presentable. With at least four processor cores, the new model is a first division player with respect to performance capability and convinces with a contemporary equipment that leaves nothing to be desired. [description] =>

The hardware offers state-of-the-art technology, for instance the USB 3.0 connections, the eight GB working memory, or the powerful processor that runs with only 10 watt energy.

The system is cooled passively, protected by a robust metal housing, and thanks to its very thin construction, customers can integrate it in the environment unobtrusively. And they have even more choices in respect to the software available as the WINDBOX II Quad is aligned with all Windows operating systems from version 7 on, no matter if 32 or 64 bit.

Never change a winning team: And true to this maxim, the mini pc forge provides – together with MSI IPC – the meanwhile fourth generation of the WINDBOX II series (MS-9A65) on the market which one is highly presentable. With at least four processor cores, the new model is a first division player with respect to performance capability and convinces with a contemporary equipment that leaves nothing to be desired.
Read more spo-comm is pleased to announce that the WINDBOX III Advanced series, which was developed together with MSI IPC (MS-9A75), is now available and meets the highest performance and security requirements. This versatile mini-PC boasts improved performance in an identical form factor, complete protection against dust and dirt and a fully passive cooling system.
Read more 11 Oct 2017 Array ( [id] => 288 [title] => spo-comm and MSI IPC: 10 years of cooperation [authorId] => [active] => 1 [shortDescription] => Since almost 10 years spo-comm and MSI IPC have been working together. At the very beginning of this cooperation a new Mini-PC was launched – the WINDBOX. This series is celebrating its 10 year anniversary soon and we would like to share the WINDBOX’s story at spo-comm with you. [description] =>

In 2010 the first Mini-PC of the series III – t – was released. Using a Dual Core CPU and the first Intel HD graphics, it was now possible to complete even more demanding operations.

Since almost 10 years spo-comm and MSI IPC have been working together. At the very beginning of this cooperation a new Mini-PC was launched – the WINDBOX. This series is celebrating its 10 year anniversary soon and we would like to share the WINDBOX’s story at spo-comm with you.
Read more
Stay up-to-date with the spo-comm newsletter.
We use cookies. Some of them are technically necessary (for example for the shopping cart), others help us improve our website and to offer you a better user experience.