The spo-book WINDBOX III Plus is end of life. The successor WINDBOX III Advanced has an even better performance and is from now on offered at the same price. 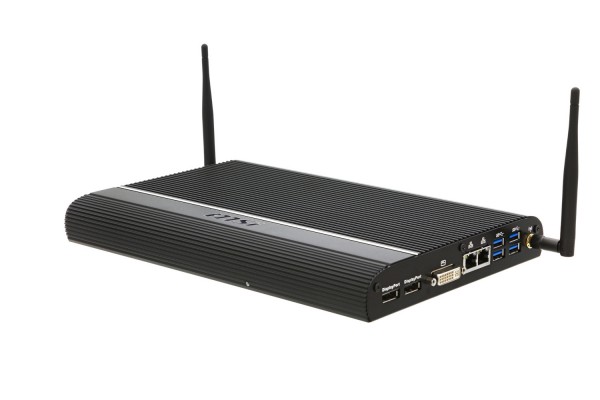 The successful WINDBOX III series exists since 2010 and is developed together with MSI IPC (MS-9A75). Thanks to its high performance, the flat design and passive cooling, the series is the right solution for various requirements and one of the bestsellers of spo-comm.

The new spo-book WINDBOX III Advanced is characterized by an even faster and better performance. The Ivy Bridge CPU is replaced by an Intel Core i5 processor of the latest Broadwell generation. Thus the industrial PC can run multiple applications simultaneously. To ease the transition for our customers, the price was cut: The WINDBOX III Advanced now costs the same as its predecessor.

Both models have the exact same external dimensions, while the connectors have been brought up to date. While WINDBOX III Plus had two COM interfaces, the new model has only one. In return the HDMI connector has been replaced by two DisplayPort. Together with the DVI-I connector three monitors can now be operated simultaneously. The two audio ports have been moved from the back to the front panel. Not only two, but four of the six USB ports have the current 3.0 standard.

Since the new WINDBOX III Advanced went on sale six month ago, numerous models have been sold. Our customers are enthusiastic about the performance and the new possibilities, so that the further development of the PC can already be called a clear success. 5 Nov 2015 Array ( [id] => 166 [title] => NEW: spo-book BRICK i3 - Perfection in Series [authorId] => [active] => 1 [shortDescription] => This compact mini-PC, which has been developed and is manufactured in collaboration with MSI IPC, satisfies the highest demands in the field of industrial control and measurement as well as in the POS sector. The robust housing, which can withstand even adverse external conditions, and the outstanding connectivity options make the spo-book BRICK i3 an ideal partner in difficult circumstances. [description] =>

The latest hardware from Intel

The dual-core Broadwell CPU from Intel, which boasts a clock frequency of up to 2.1 GHz and up to 8 GB of RAM, provides enough power for even for the most demanding applications. At the same time, the spo-book BRICK i3 benefits from the low energy requirement of the Intel processor.

The embedded PC operates without fan assistance and therefore runs totally silently in conjunction with an SSD hard drive, generating no vibrations or other emissions. The award was presented personally when the MSI IPC leadership visited the spo-comm headquarter in Nuremberg. MSI gave thanks for the successful collaboration and set the course for new joint projects.

Concerning the development of new devices spo-comm and MSI are also collaborating closely. Thus, the manufacturers can respond to requirements by customers and implement them in order to optimize the product range steadily. This is reflected in the successful product lines WINDBOX, TURO, BRICK, NOVA and SQUARE, whose technological cores are being updated regularly.

Currently, spo-comm and MSI are planning the new products for this year. In February 2016 the further development of the SQUARE 15 panel-pc will go on sale.

Thanks to MSI for the long-term partnership and to our loyal customers, who contribute to this achievement.