At the end of 2018 we launched our first ever one-chip-system, the TEGRA 2. Its special feature: It is based on a SoC-chip. What that is and which benefits this architecture has, we explain in this article. 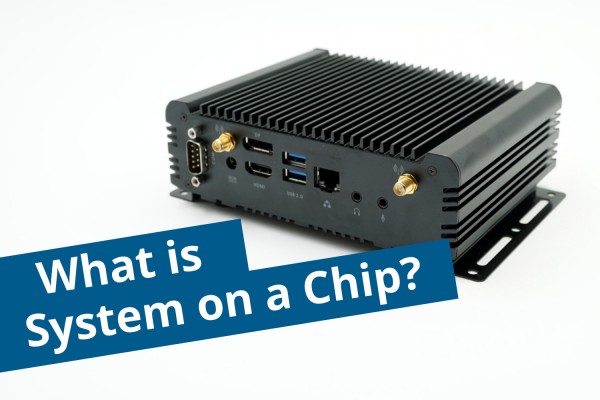 When the most important components, or even all the components of a system are combined on one single chip, it is called a system-on-a-chip. The most important part of such is the main processor, no matter if it’s an 8bit- or QuadCore-processor, the market serves everything you can imagine. Sometimes also other processors, for instance for graphics or for decoding and controlling audio data in smart phones, are soldered. The next piece is the RAM, which is integrated via one or more memory chips. All internal components are connected via the system bus (for transmitting data between CPU, RAM, Cache) and the peripheral bus (for USB amongst others).

SoCs are mostly used in the field of mobile devices and applications and in the control and automation technology (for instance in washing machines or the industrial automation).

Nvidia Tegra SoC has it all

As already mentioned, the TEGRA 2, which we released in 2018, is the first (and at the moment the only) system among all the spo-comm Mini-PCs that is SoC based. Or more precisely, it is based on an Nvidia SoC-chip. It integrates all that is needed for applications in the digital signage field: An 8GB RAM, a 32GB eMMC Flash, the namesake Nvidia Tegra X2 CPU, as well as a LAN- and WiFi-module. And everything fits into the housing with dimensions of only 160 x 132 x 51 mm (W x D x H). With the TEGRA 2 it is not only possible to play content in a resolution of 4K@60Hz on two display at once. Thanks to the 256 integrated CUDA cores, the TEGRA 2 is also capable of deep learning applications and for real time calculations and video processing in the automobile field. TEGRA 2 - next level digital signage player on SoC base

With the TEGRA 2 we welcome our next newcomer. The passively cooled Mini-PC is based on SoC-chip developed by Nvidia and is equipped with everything needed as standard. Thanks to the integrated CUDA-cores and the particularly for this hardware adjusted Linux version, the TEGRA 2 is the perfect digital signage player for developers.
Read more How is data stored in our smartphones? How do countless photos fit on a small SD card in the camera? With the same technology as for SSDs: the flash memory. We took a closer look at that.
Read more While launching our new Mini-PCs QUADRO P1000 and TEGRA 2 we already talked a lot about NVIDIA CUDA and the so-called CUDA cores. But what is CUDA actually?
Read more
Stay up-to-date with the spo-comm newsletter.
We use cookies. Some of them are technically necessary (for example for the shopping cart), others help us improve our website and to offer you a better user experience.