Which Digital Signage Media Player is the right one?

In one of the latest issues of the Digital Signage magazine was dedicated to the extensive topic of Digital Signage Media Players. We have been consulted too. Here are our answers. 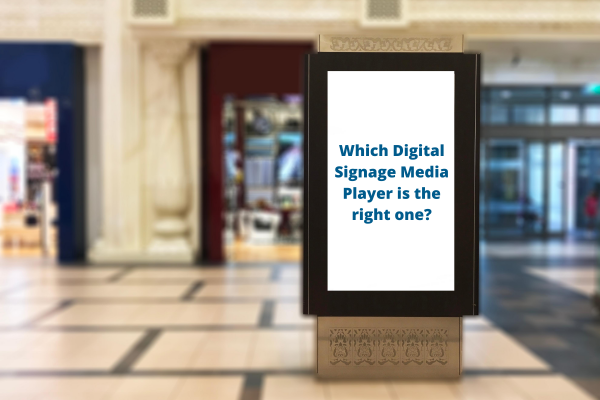 Although the individual components may be the same, media player means something different than PC to most people.  What differences are there in terms of hardware?

There are differences in design, the technical platform (ARM or x86), the connectivity options, the performance class, the ventilation, and the quality of the components used.  A classical media player is constructed similarly to a PC.  Firstly, there is the motherboard - the main circuit board - with a processor, a graphics processor and the memory. Additionally, there is a mass storage - the hard drive or solid state drive - and finally there's the housing with the terminals. Technically, ARM-based media players have the processor, GPU and other components integrated into a single chip.  This is called System on a Chip, or SOC. Due to spatial constraints the mass storage device is located directly upon the motherboard or is a simple memory card.

There are media players with active cooling, e.g. fans, and passive cooling. Active cooling can cool media players with high power consumption, and thus it can cool very powerful systems. However, all cooling systems are subject to mechanical wear. If the cooling system fails, the system can also no longer be operated. An additional disadvantage of such systems is the limitation on device location, as it should only be installed in a dust-free location.  However, passive cooling can only be used up to a certain power consumption level.  Otherwise the necessary cooling elements would be too large.  Choosing a location for the installation of the media player is a deciding factor.  The location should allow for sufficient air circulation.  Furthermore, the temperature must be stable and should not get too high.  Ideally, temperatures would remain below 30 degrees Celsius.  The orientation of the media player, whether installed vertically or horizontally, is generally of no consequence.

The industry also talks about appliance systems.  What are they exactly?

An appliance system is a combined solution of hardware and software components.  Ideally, one gets a software solution that's tailored specifically to the hardware.  This leads to a lower error rate as well as to a homogeneous solution.  However, such systems limit you to one provider's offerings.  The advantage is that support service is concentrated upon a limited number of variants.  The advantages of such systems are most pronounced when they are used over large networks from many different locations.  The emphasis here is on mainstream use.  This also applies to the content played, which may not include all formats.  This becomes especially apparent during usage because special formats, such as multi-monitor usage or unique environments, such as outdoors, are generally out of the question.  It's difficult to integrate an appliance system to a pre-existing network, because the system concept is tailor-made to the manufacturer's specifications and thus a limited number of options are available.

Which ports should a media player have?

A digital connectivity port for a monitor should now be considered standard: DVI if the connecting cable has to be secured, or otherwise HDMI or DisplayPort, whichever is supported by the monitor that will be used.  The latter two ports allow users to spare themselves an additional audio cable.  Nevertheless, a separate audio port (Line Out) should also be available.  A network connection is essential for device connectivity.  A wired network connection will function most reliably, but Wi-Fi is also an option.  In remote locations, a cellular network connection is desirable.  USB ports are sufficient for connecting peripheral devices in most cases, however some special cases may still require a serial COM port.

There is no real standard for ports and connectivity.  One exception is the OPC standard for media players, which can be integrated into special monitors.  This is, however, a special case.

Which formats should always be supported?

All formats.  One exception to this are the very high-res video formats, e.g. 4K; as these require additional high performance hardware components which currently cause significant cost increases.

What is your advice to novices?  What should they look out for?

In the beginning, one should choose a flexible solution.   As long as the player has the most important ports, can play back at least Full HD content without trouble, and will be available for the next 3-5 years, future developments can still be mapped well.  The processor shouldn't be brand new, but it shouldn't be older than two years old either.  Brand new processors often experience growing pains when they're first introduced.  After six to twelve months these have generally been resolved via updates.  When starting a project, the CPU should not be too old, in order to ensure long-term availability.

Which criteria generally apply to selecting a media player?

The selection depends on user demands on the software as well as the type of content to be played back.  The media player should have sufficient power, but this must be revealed in testing.  The second critical factor is the location of the installation.  How large can the media player be?  Is the installation location suitable for active cooling, or would passive cooling be preferable in terms of reliability?  How will the system be connected to a network?  What are the climatic conditions?  How will image output be achieved?  How will sound output be achieved?  Finally, how will the media player be operated?  Will it be in use 24/7?  Will the system be powered on and off according to a schedule?  How long is the planned installation time?  Is the framework for application local, regional, or even international?  The selection of the right media player will take place in consultation with the seller. To avoid future mistakes, you should allow sufficient time for realistic tests.

Higher resolution, faster transmission, additional transmission methods, or larger video wall installations and networks - the expectations for DS are very high. What are the trends in the development and production of media players in particular?

Media players will be smaller in the future; will offer more computational power and increasingly higher resolution playback.  Concurrently, the power usage will decrease so that passive cooling will become increasingly prevalent even in high performance systems.  The percentage of entry-level Android-based media players will increase.  Trend niches will be outdoor applications and applications in transportation, such as buses, ships, and trams as mobile networks become more affordable and more capable.

In the private sector, operating systems are generally chosen based on principle. Does that apply equally to media players in the DS sector? What about the ability to install different operating systems simultaneously?

Technically the installation of different operating systems is conceivable, however, it's not worth the effort. As a rule of thumb, so-called x86 platforms usually run Windows and Linux. Apple computers belong to this platform, but OS X is restricted by the manufacturer and can only be used on Apple systems. Android currently only runs on ARM, although Intel has attempted to install it onto x86 platforms.

And how do Windows, Android, Linux, and OS X-based media players differ from one another?

The following applies to Windows-based operating systems: all hardware for x86 platforms is supported.  Additionally, there is a wide range of software solutions for the DS field. Basically, all types of media content can be played back and image output can meet all standards, as long as the technology can produce the output.  Licensing costs per player make up a large portion of the total costs in this case.

There are only a limited number of solutions for Android, and they also usually only involve simple playback of media content.  The selection of media content is limited as not all formats are supported.  The hardware is cheaper, but also less capable.  There are no licensing costs.

It should be noted that Linux distributions could be used on all technical platforms. However, not all components are supported for this by their manufacturers.  Driver availability limits the selection of components. Most Linux distributions have no licensing costs; however, a high level of expertise is required for professional operation.

Considering OS X in turn, there are very few suppliers of DS solutions for Apple's operating system.  The user is tied to Apple hardware.  Apple products originated on the consumer and office markets and do not always live up to professional standards.  Media content can be played back practically without limitations and the licensing costs for the operating system are "coupled" with the hardware. With the spo-book ELIX QM87, we now launch a system onto the market that meets all the requirements and that is technically up-to-date.

A high-res screen resolution with up to 3840 x 2160 px as well as comprehensive remote maintenance options thanks to Intel iAMT 9.0 – including an optional connection in mobile networks like UMTS/LTE – additionally guarantee the customer satisfaction. The new mini pc is securely packed in a robust metal housing, and it’s also the extremely flat design which allows a smooth and unobtrusive integration with the environment. On top, the latest Intel Core i-technology of the 4th generation (Haswell) stands for durability and top performance – and, even more important, for an eco-friendly use of cost and energy.

The technical basis of motherboards is now Intel's mobile Ivy Bridge technology with the chipset QM77. Accordingly, the new models were also named. They replace the previous models EXPANDEDN HM67 and NINETEEN HM67. Combined with the related processors, there is more performance at the same or even lower power consumption.

Flexibility is the outstanding characteristic of the two new models. On the one hand are all important components, such as CPU, memory and mass storage, configurable. On the other hand, they have a full PCIe 16x slot, which enables the integration corresponding PCIe cards.

The spo-book NINETEEN is designed for use in racks and data centers and has the possibility to be equipped with a 3.5'' hard disk RAID system. The spo-book EXPANDED is a stand-alone system and offers the option of a 2.5'' RAID hard disk system. Further technical information can be found on our product pages. We cordially invite to visit us. You can easily register for free on the ISE website with our invitation code: 247056

We will present, besides our well-known Mini-PCs for the Digital Signage and KIOSK market, novelties, like POS systems that can control several monitors simultaneously and Android media players for professional usage.

If you want to know more about spo-comm and our product, we will be happy to arrange a meeting. Please use the meeting maker at ISE website or just contact us directly.