How can my Mini-PC stay healthy? Part 3: Cables

In the first two articles of this series that deals with the health of Mini-PCs, we already took a look at the right cooling system and the SmartFan function of actively cooled devices. But also from the exterior, or rather on the housing of Mini-PCs there are things that can have an impact on the health of a Mini-PC: Cables that are connected to the different ports. 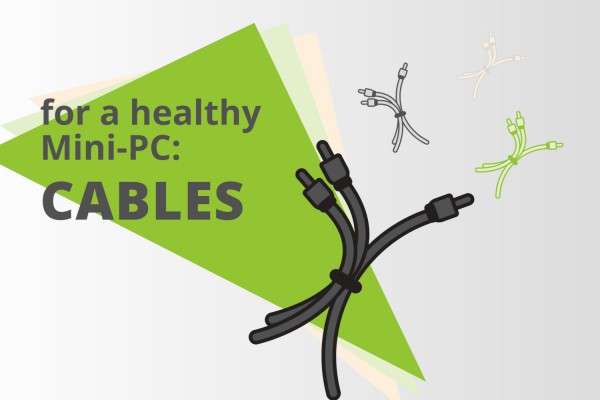 Whether it is to get a connection to the internet or to external devices: Wires always play a role. If these are not chosen and installed correctly, they can easily break or rip out and in conclusion, damage the Mini-PC. Which options are there to protect the Mini-PC from this?

For flexible electric leads, which involves cables, there is a mechanical safeguard, the so called cable or strain relief. For non-stationary electric supplies (for example wires, circuit boards and audio connectors) this cable relief is obligatory and standardized after EN 62444.

Cable reliefs are mostly made of metal or plastic clips that prevent ripping out cables by clamping them. What this looks like you can see here.

Another possibility is the usage of screwable cables which, among others, serve the cable relief. The benefits are many. A screwable power adapter for example (see pic. 3) cannot be ripped out so easily or by accident. Like this, the PC is constantly supplied with power and the operating system is spared from damage through a sudden reset. Another benefit of screwing cables, for example on to the housing of a Mini-PC is a better isolation. Due to the tight and dense connection, outside influences such as dust or moisture in production halls, can no longer get inside the system and extend the lifetime of the Mini-PC.

Today, according to DIN EN 60423, metric screw threads are mandatory, as well as a protection class of at least IP54. To protect humans of potential danger when using the devices, protection classes of IP 65 (protects from dust and water jets) or IP68 (dust and waterproof) are common.

Which cables and interfaces are screwable?

After all this theoretical knowledge, let’s move on to the practice: Which cables are even screwable? The most common are probably the serial interface RS-232, also known as the COM port, and the multimedia interfaces VGA and DVI (see pic. 2). Their sockets and plugs are equipped with threads as standard and like that, prevent the cable to rip out.

There are also cables that sit firmly in the socket, without being screwed. This applies on one hand for the LAN cable and on the other hand for the multimedia interface DisplayPort. Both of them back on engaging hooks, so called locking tabs that ensure the cable to sit tightly. To loosen the cable the nib on top of the plug can easily be pushed down.

With the HDMI cable it is a completely different story. Since there is no protection included fundamentally, by this time there are several different options that want to ensure the cable to be stable. On one hand there are specific silicone cases for the cable and on the other hand you can get HDMI cables that have a mechanism with which a locking system can be turned on and off manually. How can a Mini-PC stay healthy? Part 1: The correct cooling

The spo-comm Mini-PCs satisfy our customers with their persistence – among other things because of the use of high quality components. But also as the user of the systems you can make sure that your Mini-PC stays healthy. Our new blog series is all dedicated to this topic. Today: The right cooling system.
Read more How can my Mini-PC stay healthy? Part 2: SmartFan

Since our new blog series is all about the health of your Mini-PC, we want to show you what you can do to help your PC regarding this topic. We already confronted the right airing/ventilation and today it’s about something that goes along with this: the SmartFan settings for an active cooling system.
Read more