What is the difference between SMA and RP-SMA?

The terms SMA, RP-SMA and the associated sockets and antennas, which are referred to as male and female, easily cause confusion. So that the screw always fits the nut, we want to take a closer look at the various connection options of Wi-Fi and GPS antennas. 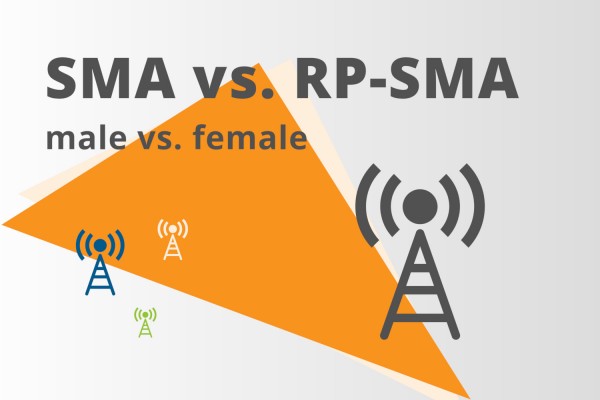 The abbreviation SMA stands for "SubMiniature Version A" and describes a coaxial  connector for high-frequency applications, which was developed in 1960. Because this connector is screwed, it is mechanically very robust and also provides good electrical shielding.

It is used in microwaves (for connecting high-frequency cables that transmit microwaves), portable radios and cell phone antennas. SMA is used in our Mini-PCs when connecting them to Wi-Fi or GPS antennas. An SMA connector is used in frequency ranges from 1 GHz to 18/26.5 GHz. From 27 GHz upwards, more modern plugs, so-called "super SMA", are used. SSMA (Small SMA) was developed for use in space and can be used up to 40 GHz.

The SMA connector consists of a plug and a socket. The plug is on the SMA antenna and consists of a barrel with inside threads and a metal centre pin as inner conductor. In this case this is the so-called "male" connector. The corresponding "female" SMA socket is located on the housing of the PC. It has a barrel with outside threads and a centre sleeve in the middle, in which the pin of the plug fits.

RP-SMA stands for "reverse polarity" (sometimes also referred to as reverse SMA or for short "R-SMA"). It is designed to prevent the unauthorized connection of an external antenna to increase the range. In an RP-SMA connector, the gender has been changed. The RP-SMA male is also the connector with inside threads, but it has the metal sleeve as an inner conductor. The RP-SMA female socket has a barrel with external threads and a centre pin.

When they are plugged, the two are indistinguishable and the signal quality is the same. Although an RP-SMA plug fits mechanically into an SMA socket, it does not fit electronically. Such a connection is therefore not functional. If the socket and plug do not match, adapters can easily solve the problem to equip these Mini-PCs with antennas.

The different SMA connectors
Passende Blogartikel
What’s new? AMD grows in market share & Ryzen...
Which interfaces can we find on a Mini-PC?
What is the difference between mobile and... In the last months there was no scent of a silly season in the IT field at all. Also September had plenty to offer: The market shares of AMD are growing to a top level, whereas the prices of their AMD Ryzen processors drop. The competitor Intel releases special processors for Artificial Intelligence and furthermore, the USB 4 specification was adopted.
Read more Which interfaces can we find on a Mini-PC?

The Mini-PCs from spo-comm all have the most different interfaces. Whether it is to connect TVs, printers, USB sticks or headphones: Everyone gets one’s money’s worth. But which interfaces are there in general?
Read more CPUs are not always the same. Depending on the device in which a processor is installed, different characteristics with regard to performance, power consumption or waste heat are important. Which types there are and what distinguishes them, will be clarified in this article.
Read more
Stay up-to-date with the spo-comm newsletter.
We use cookies. Some of them are technically necessary (for example for the shopping cart), others help us improve our website and to offer you a better user experience.