The power input of the Mini-PC – Part 3: the control cabinet

A control cabinet brings its own challenges to a power input, since not every PC is suitable for a control cabinet from the outset, some points must be considered. At this point we continue with our current blog series about power inputs for Mini-PCs. We also clarify the necessary features, peculiarities and differences. 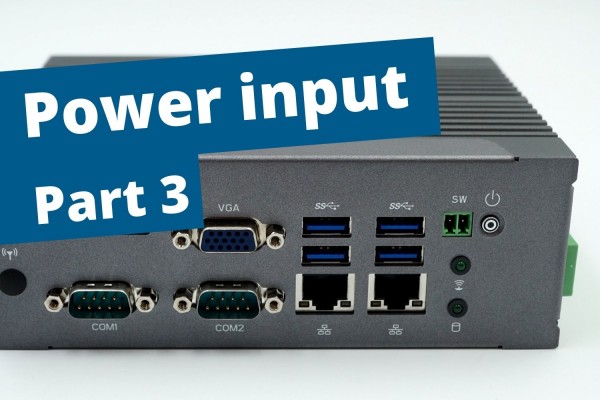 What exactly is a control cabinet? It houses the electrical and electronic components of a machine tool or production facility that are not located directly in the machine.

The DIN Rail PC is equipped with a 3-pole terminal block, which is also partly installed on Vehicle PCs. Thanks to its current input, which accepts 9-36 VDC (DC voltage), the DIN Rail PC can also handle unusual voltages. This is important so that it can work in different cabinet configurations with different power supply solutions. Such a Mini-PC does not require an external power supply. This type of PC assumes that there is one in the control cabinet in which the PC is installed, that generates the voltage acceptable to the PC. The terminal strip is screwed to the PC and thus sits firmly in the housing, the wires from the customer power supply are screwed into the connector as with normal screw terminals. In contrast to our NOVA Q170 the DIN Rail PC has only the terminal bushing and no additional DC IN bushing.

In addition to this current input, we have described two more in detail in our blog series, the standard and the vehicle PC. Read more about the features of these two power inputs and the challenges they face in the other articles of our blog series “Power Inputs for Mini-PCs.”

spo-comm Mini-PCs which can be attached to the DIN Rail mounts are the PCs of the BRICK series and those of the WINDBOX series. However, a DIN Rail mount does not automatically mean that a PC has a wide range power input and vice versa. A RUGGED, for example, is equipped with a wide range power input as well as with a terminal strip socket but does not have DIN Rails and is therefore not suitable for a control cabinet. The power input of the Mini PC – Part 1: The standard

A connection for Mini-PCs without which nothing runs is the power connection. Since every system is equipped with such a connection, it is time to dedicate a blog series to the different power inputs for Mini-PCs. We're starting with the standard input, which is used most of the times.
Read more The power input of the Mini PC – Part 2: Vehicle PC

Another power input that deserves its own blog article is the one on the vehicle PC, it also has its very own features and is by now indispensable on the PCs. With this article we continue our blog series “Power Inputs for Mini-PCs" and summarize all features of the vehicle PC in it.
Read more With fresh motivation into the new year – how was 2021?

A tradition that wants to be continued – for the fourth time in a row we asked for an interview. Together with spo-comm CEO Michael Sporrer and CMO Bernd Moosmüller we want to take a look back on the past year. Since 2020 was a bit of a challenge, we are excited to see how 2021 went.
Read more
Stay up-to-date with the spo-comm newsletter.
We use cookies. Some of them are technically necessary (for example for the shopping cart), others help us improve our website and to offer you a better user experience.